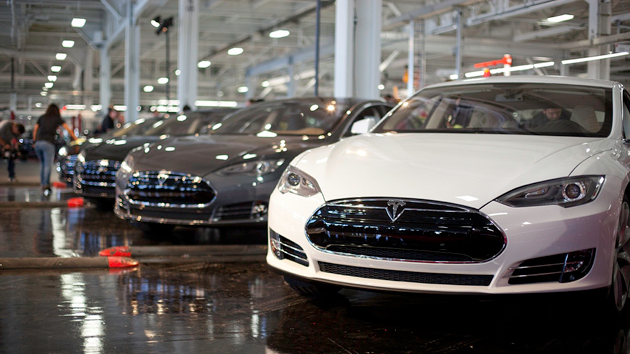 Electric vehicle sales in New Jersey ran out of batteries earlier this month, when the Chris Christie administration voted to ban car manufacturers from selling directly to drivers. The companies must now use third-party dealers. The ban applies to all car manufacturers, but seemed particularly aimed at Tesla, which had been in negotiations with the administration for months to sell electric cars straight from its own storefronts in the state.

The move was a win for the state’s surprisingly powerful auto dealer lobby and a loss for one of the country’s biggest electric car makers. But it also cemented New Jersey’s place as a non-contender for the real prize: a $5 billion battery “gigafactory” that Tesla plans to begin construction on later this year. With an estimated 6,500 employees, the factory will likely become a keystone of the United State’s clean energy industry and an economic boon for its host state. Now, Arizona, Texas, New Mexico, and Nevada are scrambling to get picked, and last week Republican legislators in Arizona began to try pushing their state to the top of the pile.

It’s the latest sign that, at least at the state level, the clean energy industry’s best friend might be the GOP. Newt Gingrich quickly pounced on Christie after the direct sales ban for “artificially” insulating car dealers, just weeks after calling for John Kerry to resign after Kerry named climate change as a principle challenge of the generation. On Tuesday, Texas Governor Rick Perry called his state’s direct sales ban “antiquated” nearly a year after a Democrat-backed bill to change the policy was killed.

New Jersey and Texas aren’t the only states where you can’t buy a Tesla car directly from the company: Arizona and Maryland also have direct sales bans. But a bill passed out of committee in Arizona’s GOP-controlled Senate last week would reverse the state’s position and allow electric vehicle companies to sell directly out of their showrooms. The bill’s sponsor, Rep. Warren Peterson (R-Gilbert) said he was spurred by the New Jersey situation to amend what he sees as a creeping assault on free market principles.

“For me, it’s not about Tesla or electric cars,” he said. “For me, a big concern I have now is we are limiting someone’s choice.”

But despite backing from some prominent Arizona Republicans (Sen. John McComish told the Arizona Daily Star he didn’t see why the state should “prevent someone else who has a better idea from making an effort to enter that industry”), Warren said he’s faced opposition from others who see the bill as damaging to the state’s traditional car market or a handout to Tesla, arguments that swayed the decision in New Jersey.

“I have a tough time understanding why Republicans are opposed to it, because free markets are such a big part of the platform,” he said. “States that moved away from this have made a big mistake.”

The Republican-eat-Republican battle over Tesla mirrors another clean energy fight playing out nationwide. Conservatives aligned with large utility companies are squaring off with the solar power industry and libertarian-leaning Republicans over rules to allow homeowners with solar panels to sell excess power back to the grid, a policy known as net metering, which is allowed in more than 40 states. Some utility companies, however, worry the practice will disrupt their business model as more and more homes go solar. That fight has been particularly vicious in Arizona, where the son of conservative icon Barry Goldwater has led the pro-solar charge on free market arguments.

“In a lot of ways, [clean energy] is an existential crisis” for Republicans.

“In a lot of ways, [clean energy] is an existential crisis” for Republicans, said Marita Mirzatuny, a Texas-based energy analyst for the Environmental Defense Fund. Some “are fighting on behalf of old entrenched regulations, which seems counterintuitive,” because at the same time “there’s a lot of money and momentum moving into the clean tech realm.”

With Tesla’s battery factory on the line, the stakes are now higher than ever, and Arizona is poised to become the first state of the four in line for the factory to clear its regulatory hurdles.

“For Texas to lose out because of regulation like that is the ultimate irony,” Mirzatuny said.

The proposed factory has implications beyond just electric vehicles. Electricity storage is a central challenge for the renewable energy industry as well. Rooftop solar companies still struggle with how to store excess power, and some are now relying on the car industry to perfect that technology. California’s biggest solar installer, SolarCity, is already using Tesla batteries to store power from homes in that state, and on Tuesday Honda unveiled an experimental carbon-neutral house that relies on car batteries.

As clean tech of all kinds matures as a growing market, Mirzatuny said, more conservatives might embrace the economic potential in fighting climate change.

“Economics are finally aligned with environmental protection,” she said. “That’s a rare opportunity.”