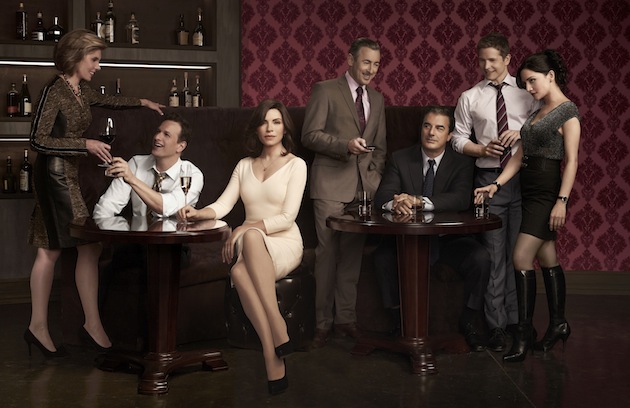 So if you aren’t watching it, go watch all five seasons right now. Forget your job. Forget your family. Forget your personal hygiene. Go and mainline all of it now.

Ok, if you have been watching The Good Wife, we need to talk about last night.

THIS IS HAPPENING SPOILER IS ABOUT TO HAPPEN LAST EXIT TO WILL IS DEAD.

He’s dead! They killed him! He’s dead! Shot to death in a courtroom! The blond kid he was defending took the gun from the bailiff and shot a bunch of people and Will is dead!

Will! Will, the male lead. The good wife’s boss. The good wife’s lover. One-third of the central tension of the show! He’s dead. He’s dead. He’s dead. I have no coherent thoughts here. Save this: Brave, bold move, The Good Wife. It takes courage to kill off the second most important character on the show. Josh Charles’ deal was up after the fourth season and he signed on for this limited 15 episode run because he loved the show and wanted to give the character a proper signoff.*  This seems like a good out for everybody, but wow! Bold.

Last night’s episode was one of the few genuinely shocking things I’ve seen happen on a fictional TV show.

As Robert and Michelle King, the show’s creators, write in a letter posted on the show’s website, they could “have sent Will to Seattle,” the way ER handled the departure of George Clooney. A weak, sentimental part of me wishes they had done that so Will could come back at some point, but that’s stupid. The bold move was undoubtedly the right one, at least in the short term. Last night’s episode was one of the few genuinely shocking things I’ve seen happen on a fictional TV show. In the long term, who knows what it means for the show and the daily dynamic. I’m sure the writers will be able to convert the old Good Wife into the new Good Wife. And that’s what it will be. The Good Wife 2.0. Because The Good Wife was definitionally about Alicia being pulled in two separate directions, one by Peter and one by Will. What Will represented—independence, vengeance,  the road not taken—remains, but Will is gone.

In the letter the Kings explain, “We chose the tragic route for Will’s send-off for personal reasons. We’ve all experienced the sudden death of a loved one in our lives. It’s terrifying how a perfectly normal and sunny day can suddenly explode with tragedy.” This is true and also heartbreaking when you think about Tony Scott, one of the original executive producers, who died in August of 2012.

Here’s a video of the cast and crew talking about Will’s death and Josh Charles’ departure.

Correction: An earlier version of this post speculated that Josh Charles was let out of a longer contract early. That is not the case.