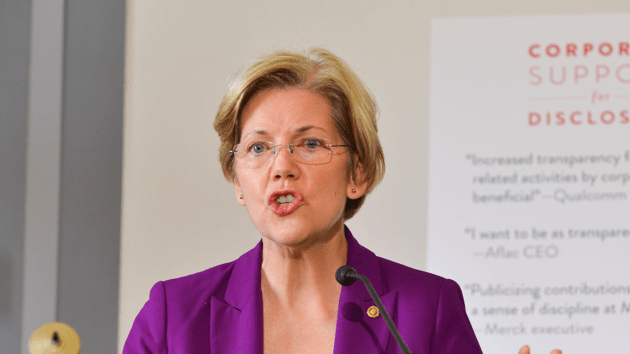 The Consumer Financial Protection Bureau (CFPB), the watchdog agency conceived of and established by Sen. Elizabeth Warren (D-Mass.) in the wake of the financial crisis, had a hard time getting on its feet. The GOP tried everything it could to hobble the bureau, but to no avail. Over the past couple of years, the CFPB has issued dozens of protections shielding consumers from shady practices by mortgage lenders, student loan servicers, and credit card companies. Here are ten things the CFPB, which was created in 2011, has done to protect the little guy:

1. Mortgage lenders can no longer push you into a high-priced loan: Until recently, lenders were allowed to direct borrowers toward high-interest loans, which are more profitable for lenders, even if they qualified for a lower-cost mortgage—a practice that helped lead to the financial crisis. In early 2013, the CFPB issued a rule that effectively ends this conflict of interest.

2. New homeowners are less likely to be hit by foreclosure: In the lead-up to the financial crisis, lenders also sold Americans “no doc” mortgages that didn’t require borrowers to provide proof of income, assets, or employment. Last May, the bureau clamped down on this type of irresponsible lending, forcing mortgage lenders to verify borrowers’ ability to repay.

3. If you are are delinquent on your mortgage payments, loan servicers have to try harder to help you avoid foreclosure: During the housing crisis, loan servicers—companies that collect payments from borrowers—were permitted to simultaneously offer a delinquent borrower options to avoid foreclosure while moving to complete that foreclosure. New CFPB rules force servicers to make a good faith effort to keep you out of foreclosure. That’s not all: Loan servicers will now face civil penalties if they don’t provide live customer service, maintain accurate mortgage records, and promptly inform borrowers whose loan modification applications are incomplete.

4. Millions of Americans get a low-cost home loan counselor: In Jan 2013, the CFPB required the vast majority of mortgage lenders to provide applicants with a list of free or low-cost housing counselors who can inform borrowers if they’re being ripped off.

5. Borrowers with high-cost mortgages get an outside eye: Lenders who sell mortgages with high interest rates are now required to have an outside appraiser determine the worth of the house for the borrower. If a borrower is going to be paying sky-high prices for a fixer-upper, at least she’ll know it beforehand.

6. Fly-by-night financial players will be held accountable: Part of the CFPB’s mandate is to oversee debt collectors, payday lenders, and other under–regulated financial institutions that profit off low-income Americans. The bureau is preparing new restrictions on debt collectors, and considering new regs on payday loan industry. In the meantime, the bureau is cracking down on bad actors individually.

7. Folks scammed by credit card companies get refunds: In October 2012, the CFPB ordered three American Express subsidiaries to pay 250,000 customers $85 million for illegal practices including misleading credit card offerings, age discrimination, and excessive late fees. This past September, the CFPB ordered JPMorgan Chase to refund $309 million to more than 2.1 million Americans for charging them for identity theft and fraud monitoring services they didn’t ask for.

8. Student lenders face scrutiny: The CFPB oversees private student loan servicing at big banks to ensure compliance with fair lending laws. In December, the agency announced that it will also start supervising non-bank student loan servicers, which are companies that manage borrowers’ accounts. Many of these servicers have been accused of levying unfair penalty fees and making it hard for borrowers to negotiate an affordable repayment plan.

9. Service members get extra protection: In June, the CFPB ordered US Bank and its non-bank partner Dealers’ Financial Services to refund $6.5 million to service members for failing to disclose fees associated with a military auto loan program. In November, the CFPB ordered the payday lender Cash America to pay up to $14 million for illegally overcharging members of the military.

10. Consumers get a help center: If your bank or lender does anything you think is unfair, the bureau has a division dedicated to fielding consumer complaints. The agency promises to work with companies to try to fix consumers’ problems.