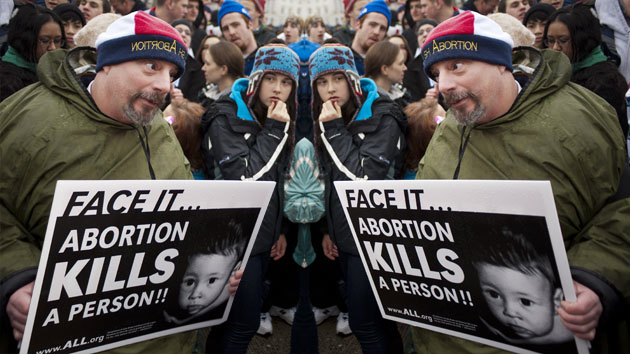 A mysterious new anti-abortion group with ties to conservative pundit Erick Erickson has warned Georgia Right to Life, the state’s oldest pro-life group, that it aims to displace the older group as the National Right to Life Committee’s Georgia affiliate.

But the fight, ostensibly over which group is better-positioned to end abortion, looks as though it is calculated to influence Georgia’s competitive Republican Senate primary. “You can’t say what someone else’s motives are,” says Genevieve Wilson, a spokeswoman for Georgia Right to Life, the older group. “But it certainly looks like [the new group] has a political motivation behind it.”

Leaders of each anti-abortion organization have a preferred candidate in the volatile, five-way contest to replace the retiring Sen. Saxby Chambliss. Georgia Right to Life has endorsed GOP Rep. Paul Broun, a congressman since 2007. The new group, Georgia Life Alliance, which was formed two weeks ago, does not mention any candidates on its sparse website. But the group is supported by conservative RedState editor Erick Erickson, who has been outspoken in his support of Senate candidate Karen Handel in this race and during her 2010 campaign for governor.

The stakes are high. Republicans likely need to hold the Georgia seat if they are to retake control of the Senate. And although Georgia’s electorate leans Republican, election analysts such as Nate Cohn of The New York Times have predicted that the Democratic candidate, Michelle Nunn, could score a surprise pickup for Democrats—provided she runs against a weak Republican opponent.

And dispute between Georgia Life Alliance and Georgia Right to Life could shine a spotlight on two Republican candidates who pose that exact problem. Joel McElhannon, a Republican political operative who works with Georgia Life Alliance, has warned that Broun, who offers the media “a gaffe every other day,” could cost Republicans the seat. Broun has called evolution and the Big Bang theory “lies straight from the pit of hell” and referred to the Civil War, in a speech on the floor of the House, as “the Great War of Yankee Aggression.” “Georgia voters tend to be conservative, but on a statewide basis they tend not to be crazy,” McElhannon told National Journal in November. “So that’s a problem for someone like Paul Broun.”

Erickson has said that in a matchup with Nunn, Handel “makes a lot of sense for neutralizing the ‘war on women.'” Yet Handel, a former vice president of the breast cancer charity Susan G. Komen for the Cure, is best known for helping pressure the foundation into cutting off $680,000 in grants to Planned Parenthood for breast cancer screenings and education programs in early 2012. Komen officials claimed that the group was responding to House Republicans’ investigations of Planned Parenthood’s finances. But the move was largely perceived as political, and facing a tidal wave of public outrage, the foundation reinstated its partnership with the women’s health provider—at which point Handel resigned.

The creation of Georgia Life Alliance may have roots in a spat between Erickson and Georgia Right to Life that unfolded last summer. The US House had just voted to pass legislation banning nearly all abortions at 20 weeks after conception. Broun, who initially supported the bill, voted against it after fellow House Republicans added an exception to the ban for women who became pregnant through rape or incest.

Broun’s vote put him on the fringes of the House Republicans but right in line with Georgia Right to Life, which requires all the politicians it endorses to pledge “protection for all innocent human life from earliest biological beginning through natural death.”

After the vote, Erickson excoriated Georgia Right to Life for its rigidity on RedState. “As far as I am concerned, Georgia Right to Life has now become the Westboro Baptist Church of the pro-life movement,” he wrote on June 19. “Instead of saving souls, they’d rather stone those who are trying to save souls.” He called for anti-abortion activists in Georgia to form a rival group.

Georgia Right to Life has clashed with Handel before. In 2010, when she was running for governor (with Erickson’s support), the group opposed her because she supported narrow exceptions to abortion bans for victims of rape and incest. Handel also supported in vitro fertilization, citing her difficulties having biological children. This led Georgia Right to Life to accuse her of trying to justify the taking lives because she was “barren.”