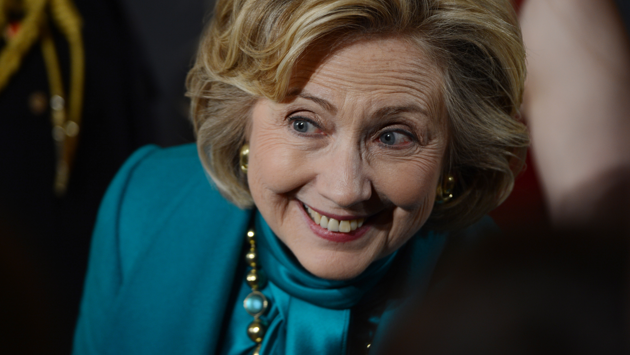 The biblical devil-beast who will assemble armies to fight the Lord on the final day of the world, according to congressional hopeful Ryan Zinke.Christy Bowe/ZUMA

But before Zinke was in the news for equating the former secretary of state to the Great Deceiver, Mother Jones flagged Zinke for the dubious campaign finance methods surrounding his campaign for Montana’s only seat in the House of Representatives.

Zinke, 53, is a former Navy SEAL, a fact he advertised loudly in 2012 when he launched a super-PAC—a political action committee that can raise and spend unlimited amounts of money on political advertising. The super-PAC, “Special Operations for America,” (SOFA) raised nearly a quarter of a million dollars in 2012 to support the election of Mitt Romney. And although SOFA didn’t succeed in putting Romney in the White House, the election allowed it to gather a substantial list of small-dollar donors and continue raising money after the 2012 election ended. At the end of 2013, the group had $255,904 on hand.

By that point, Zinke was no longer involved with the super-PAC’s leadership—he had resigned on September 30 and announced three weeks later that he was running for Congress. Soon, the super-PAC Zinke started became his biggest cheerleader. Throughout last fall, SOFA’s website, Facebook page, and Twitter account all urged donors to give to Zinke’s congressional exploratory committee, and then, his congressional campaign. In January 2014 alone, SOFA spent almost $60,000 supporting Zinke’s campaign. (The last time the seat was up for grabs, in 2012, outside spending totaled $240,000.)

If this strategy, which is entirely legal, sounds familiar, that’s because it was pioneered by Colbert Report host Stephen Colbert in 2012. As Mother Jones noted in November:

In January 2012, Colbert summoned Daily Show host Jon Stewart and Trevor Potter, a campaign finance expert, to the Colbert Report studio for a surprise announcement: Colbert was handing control of his super-PAC [to] Stewart. The two comedians signed a two-page document, then held hands and locked eyes while Potter bellowed the words, “Colbert super-PAC transfer, activate!” Colbert then announced that he was forming an exploratory committee to weigh a run for “President of the United States of South Carolina.” Stewart, meanwhile, renamed Colbert’s super-PAC the Definitely Not Coordinating with Stephen Colbert Super PAC, and promised Colbert he would run ads to support Colbert’s presidential bid.

The aim of Colbert’s stunt was to show that campaign finance laws are so flimsy that it was legal, in theory, for a politician to start a super-PAC, raise unlimited heaps of cash from big-money donors for that super-PAC, quit the super-PAC, and then run for federal office supported by that super-PAC.

Zinke’s campaign, in other words, was pretty shameless before he called Clinton the “Antichrist.” And pretty well-funded, too.

*Zinke made the Antichrist comment, which was first reported by the Montana website Bigfork Eagle, after telling his audience, “We need to focus on the real enemy.” He did not reply to a request for comment from Mother Jones. When Aaron Flint of Northern Broadcasting asked Zinke about the comment, Zinke said, “I’ve already been put on the Obama campaign enemy list—and they’re just gonna attack. That’s all these people do is attack, attack, attack.”