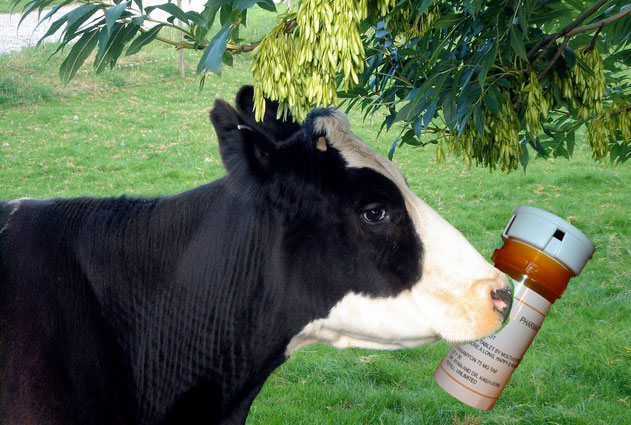 This month, McDonald’s announced that it plans to start transitioning to sustainable beef by 2016, with the goal of eventually making all of its burgers from sustainable meat. But the fast-food chain has yet to specify what, exactly, it means by “sustainable.” The company is working with the Global Roundtable for Sustainable Beef, a stakeholder group that includes Walmart and the World Wildlife Fund, to come up with a definition, and expects to announce further details of its plans in the spring. But food experts say that unless McDonald’s stops purchasing cows that are fed antibiotics to ward off disease in overcrowded feed lots, the promise will be an empty one. It’s not an unattainable goal—other chains that buy antibiotic-free beef, including Chipotle and Shake Shack, say they’ve been able to do so without significantly raising costs. But McDonald’s isn’t on board yet.

When Mother Jones asked McDonald’s whether it plans to cease using antibiotic-fed beef, a spokesman said, “McDonald’s will continue to rely on the sound science derived from this group of expert advisers including academia, suppliers, animal health and welfare experts, and the FDA, as we continue to review our policy?.” According to Hal Hamilton, founder of the Sustainable Food Laboratory, who is helping McDonald’s develop its sustainability plan, the company “definitely cares about antibiotics and other feed additives, and they would like to achieve a system that avoids things that worry consumers, but I don’t think they’ve made any specific policies.”

Food experts say that could be a problem. “You can’t have sustainable production if you’re using antibiotics other than very, very occasionally, and only when there’s a diagnosed clinical disease,” says Dr. David Wallinga, the founder of Healthy Food Action, a network of health professionals. “In the case of cattle, they shouldn’t be in feed at all.” McDonald’s has a written policy that aims to reduce antibiotic use, but the policy has been criticized for having major loopholes—such as allowing farmers to feed cows antibiotics for disease prevention, rather than merely treatment. (The McDonald’s spokesman says, “We take seriously our ethical responsibility to treat sick animals, using antibiotics to treat, prevent, and control disease in food-producing animals.”)

Last December, the Food and Drug Administration ruled that “it is important to use these drugs only when medically necessary,” given that 80 percent of antibiotics in the United States go to livestock farms, and overuse of these drugs poses a demonstrated threat to public health. For example, some women have been afflicted by antibiotic-resistant urinary tract infections that have been linked to overuse of antibiotics in poultry. But sustainability experts say the FDA’s new guidance is weak, since not only does it allow antibiotics to be used for prevention, but the recommendations are voluntary.

“The government kind of punted on this issue when it announced voluntary standards,” says journalist Michael Pollan, noting that it’s hard for the government to tackle two big industries at the same time—Big Agriculture and Big Pharma. “But if McDonald’s committed to getting rid of antibiotics, that would be a huge deal, it would change the industry.”

Industry experts say that it’s definitely possible for McDonald’s to make this change. When Chipotle switched to sustainable, antibiotic-free beef, it increased prices by only about 25 to 50 cents per burrito. (The price of antibiotic-free pork is a bit higher.) “Our customers are willing to pay a little more for food they recognize as being better,” says Chipotle spokesman Chris Arnold. He notes that Chipotle does have some trouble getting the antibiotic-free supply to meet its demand, but adds: “Having more companies use this kind of meat would likely result in faster changes within the supply system, and that could be a good thing.” Shake Shack, which has been serving antibiotic-free beef since the chain opened, says it only costs 15 to 20 percent more than regular beef. The costs are higher, spokesman Edwin Bragg says, but notes that McDonald’s could change that. “If a restaurant company of McDonald’s size could do this on a large scale, [it] could change the paradigm.”
And Pollan says that this change needs to come sooner, rather than later: “I think it’s just hitting us. We’re now dealing with infectious microbes that are resistant to most antibiotics we have. We’re already paying a price and it’s going to get worse.”