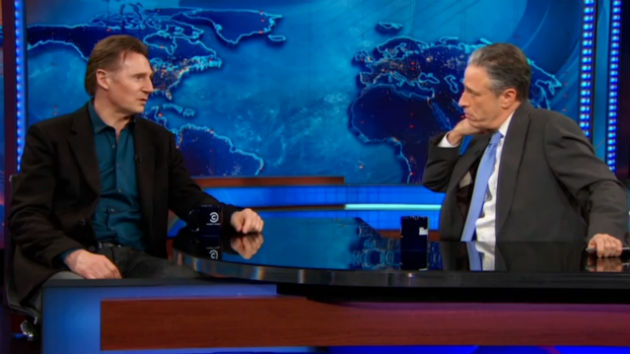 On Wednesday night’s episode of The Daily Show with Jon Stewart, Liam Neeson (star of the Taken movies, Schindler’s List, and Battleship) revealed why he was a little “pissed off” at New York City Mayor Bill de Blasio. The 61-year-old actor and New York resident wasn’t mad at the new mayor for his socialist past or his leadership during winter storms. Neeson was upset over horses.

“He wants to close this horse and carriage industry in New York,” Neeson said, referring to the mayor’s goal to replace “inhumane” carriage horses with “vintage tourist-friendly vehicles in parks.” Neeson also accused animal rights groups for spreading “false information” about the treatment of the horses in the city. (Neeson, whose close friend is a New York horse and carriage owner, previously wrote an intensely punctuated open letter to de Blasio on how he was “appalled to learn of [de Blasio’s] intent to obliterate one of the most deep rooted icons of our city!”)

Horse-drawn carriages have attracted controversy due to accusations of excessive harm to the animals. Carriage drivers of course vowed to fight a ban. Here is a clip of Stewart and Neeson’s mini-debate, via TMZ:

This isn’t the only cause Neeson is passionate about. The actor—recently famous for playing a good-natured CIA torturer who massacres ethnic stereotypes who kidnap his daughter—has a long history of working with the United Nations Children’s Fund (UNICEF), including his work as a Goodwill Ambassador and his participation in a campaign to combat violence against children. And he once stripped almost completely naked to raise money for breast cancer research.

But of all his causes, this one might be getting him the most press. For years, Neeson has been vocal on the issue of New York’s horse-drawn carriages, to the point that the Daily Caller asked in January, “Will Liam Neeson stand in the way of Bill de Blasio’s horse carriage ban?” PETA has slammed Neeson over this. “Liam Neeson…has PETA wondering if one of his horses might have kicked him in the head,” the organization wrote. In 2009, he issued a letter to city officials to rage against the “coordinated attempt by animal activists and a certain Queens council member to ban the industry from the city.” Here’s part of the letter, which you can read while keeping Neeson’s voice in mind:

As a horse lover and rider, I am deeply disturbed by the unnecessary and misguided political and extreme rhetoric against the horse-drawn carriage industry and feel obliged to counter this action.

The horse-drawn carriage business is an iconic part of this city, employing hundreds of dedicated, hard-working men and women, caring for well-bred, well-trained horses and attracting tourists to New York City for over 100 years.

As a proud New York resident, I have personally enjoyed the beauty of Central Park on a daily basis for many years, and these horses are an undeniable integral part of that experience. The notion that a well-nourished horse pulling a carriage through Central Park is considered cruelty may fit in with animal activists’ extremist view, but not with the rest of us. Surely we have a responsibility to protect commerce, especially one with such history, and one I truly feel helps define this city. May pragmatism prevail.

In 2009, Neeson made another appearance on The Daily Show—and discussed horses and carriages:

Neeson was also the star of the 2012 film The Grey, which was criticized by animal rights activists for smearing wolves as brutal and ravenous human-killers.

Mayor de Blasio’s office did not immediately respond to a request for comment, perhaps out of fear of Liam Neeson.