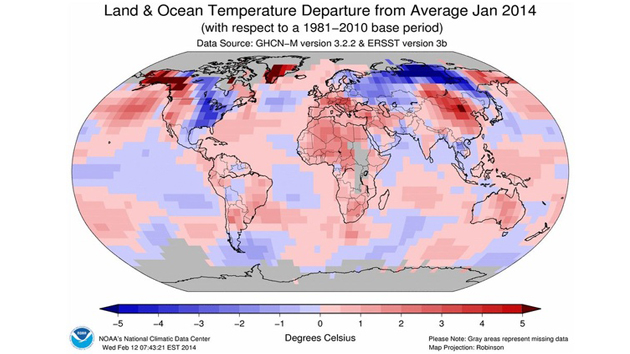 Much of America is about to be overrun by another miserable cold-dozer next week, but on the planetary scale, things have actually been warm. January’s temperatures were the hottest for the month since 2007 and, with a combined global average of 54.8 degrees, this was the fourth warmest January since records began in 1880.

That’s the word from NOAA’s National Climatic Data Center, which recently released an updated “State of the Climate” that includes the above map of temperature anomalies. Note cooler-than-normal patches in the eastern US, central Canada, Scandinavia, and a big hunk of Russia, which had country-scale temperatures 9 degrees below average. But the big story was heat, heat, heat, as NCDC explains:

During January 2014, most of the world’s land areas experienced warmer-than-average temperatures, with the most notable departures from the 1981–2010 average across Alaska, western Canada, Greenland, Mongolia, southern Russia, and northern China, where the departure from average was +3°C (+5.4°F) or greater. Meanwhile, parts of southeastern Brazil and central and southern Africa experienced record warmth with temperature departures between 0.5°C to 1.5°C above the 1981–2010 average, contributing to the highest January Southern Hemisphere land temperature departure on record at 1.13°C (2.03°F) above the 20th century average. This was also the warmest month for the Southern Hemisphere land since September 2013 when temperatures were 1.23°C (2.21°F) above the 20th century average.

Some other outliers: France tied its warmest January on record with 1988 and 1936; China logged its second-warmest January since it started collecting records in 1961; and in Spain, it was the third-hottest month since 1996.

The climatologists also highlighted a few “significant climate anomalies and events” for January and pinned them to this map. Parts of the US had a severe lack of rainfall, the UK squelched through its third-wettest January on the books, and the Arctic sea ice continues to pull a disappearing act:

To zoom in on the climate events in the US, there’s this map showing California’s ingrained drought, piles and piles of snow in Chicago, and the sweaty results of Alaska’s recent heat wave. Overall, the country’s western heat lost to the eastern frigidness—temperatures were 0.1 degrees below the 20th-century average and many states had top-10 cold Januaries, including Georgia, Alabama, Indiana, and Michigan: