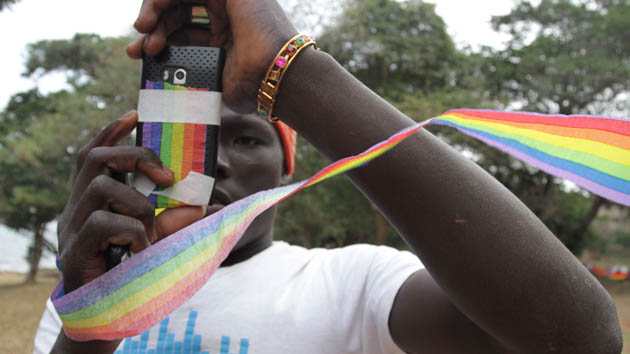 Earlier this week, when Ugandan President Yoweri Museveni approved a harsh new bill making “aggravated homosexuality” a crime punishable by life in prison, he cited a recent report from the Ugandan Ministry of Health’s Committee on Homosexuality, which concluded that same-sex attraction is mostly a learned impulse. “Since nurture is the main cause of homosexuality, then society can do something about it to discourage the trends,” Museveni said. “That is why I have agreed to sign the bill.”

This pronouncement creates a quandary for the United States. American officials, including Secretary of State John Kerry, have vehemently condemned Museveni’s decision. Yet millions of US taxpayer dollars are flowing to the agency that the Ugandan leader used to justify the legislation, according to records from the National Institutes of Health and the Centers for Disease Control and Prevention.

Gay rights activist argue that the Committee on Homosexuality report was engineered to ensure the bill’s passage, and at least one committee member—a physician named Eugene Kinyanda—refused to sign his name to it because the process had “taken a very political” direction. “I will not be used to justify the passing of a bill which as a doctor I do not fully understand,” he wrote in an email to a fellow committee member, which was reprinted on the blog Patheos.

The Ministry of Health staffer who convened the committee behind the report, Jane Aceng, also runs the ministry’s program to fight HIV. Since 2012, that initiative has received more than $5 million in funding from the CDC, which supports HIV programs in many African countries. Although HIV rates among gay Ugandan men are far higher than among the general population (as is the case in many countries), the program doesn’t include a strategy for treatment or prevention among gays and lesbians. Last year, after gay rights activists launched their own clinic to fill the gap in services and the international community applied pressure, the Ministry of Health announced it would introduce programs for gay men and sex workers. But these programs have yet to materialize. According Health GAP, a global organization devoted to combating HIV, the lack of services for gay men and other vulnerable groups is one key reason Uganda—?which had made great strides in fighting HIV—?has seen a spike in new cases over the last eight years, even as new infection rates in other African countries continue to fall.

Uganda’s minister of health, Ruhakana Rugunda, has sought to reassure the public that the new anti-gay law won’t create higher barriers to health care. “All people whether they are sexual orientation as gays or otherwise are at complete liberty to get full treatment and to give full disclosure to their doctors and nurses,” he told the BBC on Tuesday. But public health advocates are skeptical. In a recent letter to the Museveni administration, dozens of public health organizations and experts from around the world warned that some of the bill’s provisions, such as those barring the “aiding and abetting” or “promotion” of homosexuality, could “criminalize urgently needed service delivery for lesbian, gay, bisexual and transgender people,” and “have a disastrous impact on the response of the nation as a whole to HIV as well as other public health priorities.”

The CDC declined to comment. But several politicians, including Kerry and Senate Judiciary Chair Patrick Leahy, have called for cutting US aid to Uganda. The situation for gay Ugandans, meanwhile, is growing ever more treacherous. On Tuesday, the popular tabloid Red Pepper published what it calls a “killer dossier,” listing names and other identifying information about 200 alleged homosexuals. These types of public outings have been known to spur vigilante violence. In 2011, the founder Uganda’s largest gay rights organization, David Kato, was beaten to death with a hammer after his photo was splashed across the cover of a Ugandan magazine under the headline “Hang Them!”