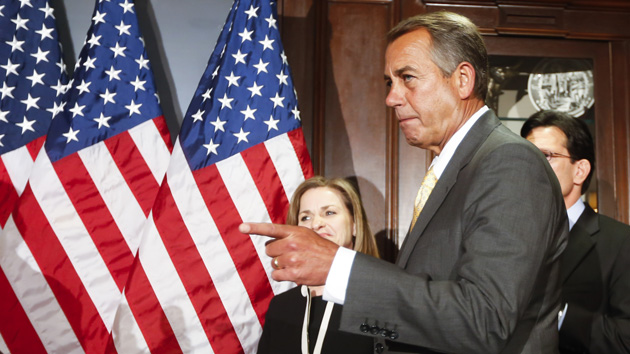 House Speaker John Boehner (R-Ohio) admitted defeat Tuesday morning. His chamber needs to pass a bill raising the debt ceiling by the end of the day Wednesday. House Democrats head to a retreat in Maryland on Thursday and Congress is on vacation next week for President’s Day, leaving few working days before the February 27 deadline issued by the Treasury Department. Boehner and his Republican colleagues had debated various asks they might attach to a bill raising the government’s borrowing limit—approving the Keystone Pipeline, repealing parts of Obamacare, and restoring a cut to military pensions were all considered—but by Tuesday it had become clear that the GOP couldn’t find a consensus. Boehner conceded that reality at a press conference. He’ll now have to rely on Rep. Nancy Pelosi (D-Calif.) to, yet again, deliver the majority of the Democratic caucus to save his hide.

The only trouble? Boehner isn’t even sure if he’ll be able to eek out the bare minimum of necessary votes from his own caucus, a mere 18 votes if every Democrat approves of the clean debt ceiling raise. “If you don’t have 218, you don’t have anything,” he said. “We’re going to have to find them.”

Voting to raise the debt ceiling should be a no-brainer. The consequences of letting the government default would be catastrophic. In December, 169 House Republicans voted on the Ryan-Murray budget. To then turn around and vote against the government’s ability to pay the bills for that budget appears illogical, until you consider the pressure conservative groups will exert on any Republican who raising the debt ceiling. The Senate Conservatives Fund—a group pushing tea party challengers in primaries—quickly denounced Boehner Tuesday, calling for a coup to replace him as speaker. Heritage Action plans to hold an approving vote against Republicans in their scorecard.

Boehner won’t have much time to win over his wary colleagues. The House is scheduled to vote on the clean debt ceiling increase Tuesday night so that lawmakers can flee town before a winter storm hits Washington late Wednesday.