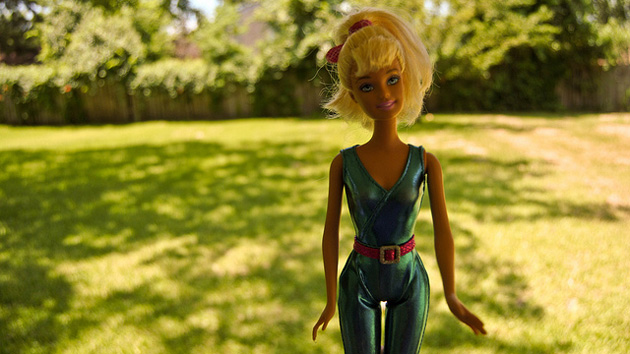 By now, it’s well known that Barbie’s body isn’t exactly realistic. If the famous doll were human, her waist would be just 16 inches around—half the size of the average American woman’s. She hasn’t always been this way; in fact, before 1997, Barbie was even less realistic.

In an interview with Fast Company Design, Kim Culmone, vice president of design for the Barbie doll, spoke candidly about why the doll remains so proportionally different from real women. Her argument essentially boiled down to: We can’t make Barbie more realistic because her clothes wouldn’t fit anymore.

Culmone: Barbie’s body was never designed to be realistic. She was designed for girls to easily dress and undress. And she’s had many bodies over the years, ones that are poseable, ones that are cut for princess cuts, ones that are more realistic…Primarily it’s for function for the little girl, for real life fabrics to be able to be turned and sewn, and have the outfit still fall property on her body.

Co.Design: So to get the clean lines of fashion at Barbie’s scale, you have to use totally unrealistic proportions?

Culmone: You do! Because if you’re going to take a fabric that’s made for us…her body has to be able to accommodate how the clothes will fit her.

In actuality, Barbie was created in 1959 so that the daughter of Ruth Handler, co-founder of the Mattel toy company, could imagine herself as an adult. In 1977, Handler told the New York Times she invented Barbie because “every little girl needed a doll through which to project herself into her dream of her future.”

When asked whether she thinks girls compare their own bodies to Barbie’s, Culmone said no way.

Co.Design: You don’t think there’s a body comparison going on when you’re a girl?

Culmone: I don’t. Girls view the world completely differently than grown-ups do…Clearly, the influences for girls on those types of issues, whether it’s body image or anything else, it’s proven, it’s peers, moms, parents, it’s their social circles.

But a 2006 study in the American Psychological Association found that girls exposed to Barbie had lower self esteem and a desire to be thinner. Another 2006 study showed that young girls ate significantly more after playing with average-sized dolls.