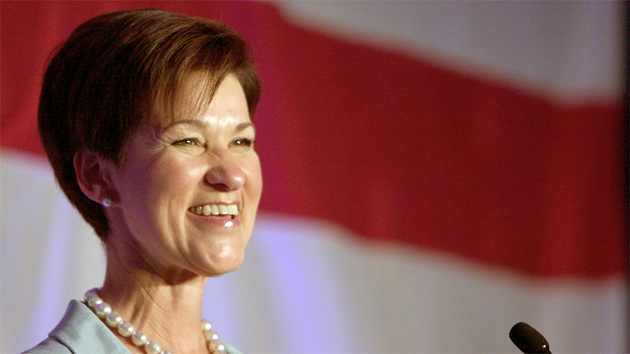 Hypocrisy is nothing new in politics. Nor is playing politics with Social Security. But the National Republican Congressional Committee, the outfit assigned the task of protecting the GOP majority in the House, pegged the needle in Social Security-fueled political hypocrisy with its recent attack on Alex Sink, the Florida Democrat running in a hotly contested and much-watched special election to fill the congressional seat once held by Republican C.W. “Bill” Young, who died in October.

A few days ago, after Sink blasted her Republican opponent, David Jolly, for being a lobbyist who has worked for clients advocating the privatization of Social Security and Medicare, the NRCC struck back. Katie Prill, a spokeswoman for the group, assailed Sink, Florida’s former chief financial officer, for supporting the Simpson-Bowles long-term budget plan that was released in late 2010. This centrist blueprint called for raising $1 trillion in revenues via taxes and proposed measures that would squeeze money out of Medicare, Medicaid, and Social Security, including a slow and gradual increase in the retirement age. Prill noted, “Alex Sink supports a plan that raises the retirement age for Social Security recipients, raises Social Security taxes and cuts Medicare, all while making it harder for Pinellas seniors to keep their doctors that they know and love. Sending Alex Sink to Washington guarantees that seniors right here in Pinellas County are in jeopardy of losing the Social Security and Medicare benefits that they have earned and deserve.” (The congressional district Sink is vying to represent covers Pinellas County.)

The Simpson-Bowles plan called for raising the retirement age to 69 by 2075. So few of Pinellas County’s current seniors would lose benefits. But putting aside the policy pros and cons of Simpson-Bowles, the NRCC was ignoring an inconvenient truth: for years, Republicans have slammed Democrats for not accepting the Simpson-Bowles plan on entitlement reforms. (The Rs, of course, were not keen on the Simpson-Bowles provisions for greater tax revenues.) Repeatedly, top GOPers have lambasted President Barack Obama and the Democrats for supposedly disavowing Simpson-Bowles. In an April 2011, interview, House Speaker John Boehner chided Obama for not moving forward with Simpson-Bowles: “He took exactly none of his own deficit reduction commission’s ideas. Not one. Come on? It’s time to grow up and get serious about the problems that face our country.” A year later Rep. Paul Ryan (R-Wis.), the House GOP’s leading budget wonk, echoed this sentiment: “The president has chosen to disavow the fiscal commission.” Sen. Lindsey Graham (R-S.C.) has urged Obama to “say yes to Simpson-Bowles.”

And then there’s the Republican National Committee. A year after Simpson-Bowles was released, it excoriated Obama for “pretending it never exisited [sic].” In a press release, the RNC whacked Obama for not opting for “The Bold, Comprehensive Approach To Reining In The Fast-Growing Federal Debt That His Own Fiscal Commission Has Said Is Needed, Now.” It noted, “OBAMA’S DECISION TO ABANDON THE FISCAL COMMISSION HAS BEEN DESCRIBED AS ‘AN ABSOLUTE TRAGEDY.'” It approvingly quoted a Bloomberg News report noting that Obama “allowed 2012 election concerns to shape his timing and willingness to advocate Social Security and Medicare reductions.” In other words, Obama was a wimp for not fully endorsing the tough medicine of Simpson-Bowles. (In later budget negotiations with Republicans, Obama would indeed show some willingness to raise the age for Medicare and readjust Social Security benefits—but only if the Republicans yielded on tax revenues.)

The Republican position for the past three years has clearly been accepting the entitlements-squeezing provisions of Simpson-Bowles. But now that a Democrat has spoken positively of the plan—adopting a position similar to that of Boehner, Ryan, and other Rs—the NRCC gallops to the left to attack her, demonstrating once again that there’s little regard for policy and principles among political operatives. (This also shows how Democrats who make good-faith efforts to strike a grand-bargain compromise with Republicans—who have long groused that Democrats always target them with demagogic assaults on Social Security—can be hammered.)

The NRCC has already spent $1 million in ads against Sink—the focus being her support of Obamacare—and a recent poll showed that the race is tight. Voters will head to the polls on March 11, and, no doubt, there will be plenty of more attacks fielded in the next two weeks.

The NRCC’s Prill did not respond to a request for comment.

UPDATE: According to the Tampa Bay Times, Alex Sink has not endorsed Simpson-Bowles in its entirety. Here’s how the newspaper put it:

The Sink campaign pushed back hard on the NRCC attack, calling it a “gross misrepresentation” to say she fully endorses Simpson Bowles. Based on an audio sent to Buzz, here is what Sink actually said: “My approach is we have got to bring down the trillion dollar deficits. They are not sustainable. The question is how do we go about doing it. I think we go back and at least dust off the Simpson-Bowles. I’m sure I’m not going to agree with everything that was in it, but it was a bipartisan group of people who said ‘this is one path forward.’ Let’s see which aspects of that we have agreement on….”

If that’s all the NRCC has on Sink, then it has nothing.