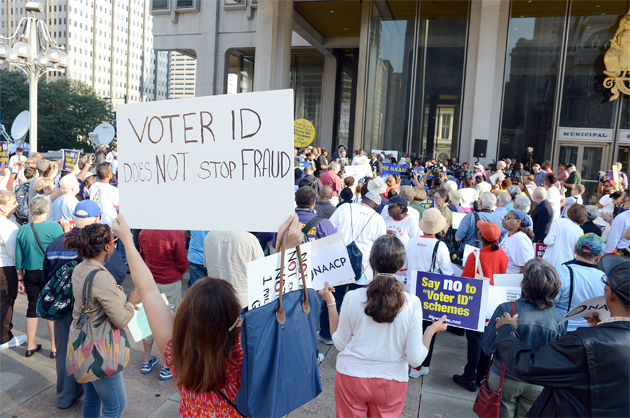 Civil rights advocates and some progressives are voicing concerns about a bipartisan Voting Rights Act overhaul introduced in both houses of Congress Thursday. The proposal would reinstate federal oversight of states with a recent history of voter discrimination, though it leaves voter ID laws off the list of grievances that qualify as discrimination.

The original Voting Rights Act, passed in 1965 and amended most recently in 2006, subjected states and counties that had historically used a “test or device” like literacy tests or racial gerrymandering to restrict voting to special oversight—any new election laws in those places had to be approved as nondiscriminatory by the federal government.

The formula for determining which jurisdictions needed oversight—which included Alabama, Alaska, Arizona, Georgia, Louisiana, Mississippi, South Carolina, Texas, and Virginia along with parts of California, Florida, Michigan, New York, North Carolina, and South Dakota—was ruled unconstitutional in a controversial Supreme Court decision last year. In the majority opinion, Chief Justice John Roberts called the formula outdated, writing, “It would have been irrational for Congress to distinguish between states in such a fundamental way based on 40-year-old data, when today’s statistics tell an entirely different story.”

Voter ID laws are exempted from the violations list, meaning restrictive changes passed in North Carolina, Texas, and elsewhere won’t be held against those states. “

Sen. Patrick Leahy (D-Vt.) and Reps. Jim Sensenbrenner (R-Wis.) and John Conyers (D-Mich.) introduced a bill to revamp that formula and reinstate the Voting Rights Act’s protections. Under the proposal, any states whose electoral changes violated federal laws (like Texas’ redistricting attempt, which federal judges tossed out in 2012 due to its dilution of minority voting power) five times over the past 15 years would be subject to federal scrutiny, while any local jurisdiction with three violations or one violation and “persistent, extremely low minority turnout” would get the same treatment. Under these rules, only Georgia, Louisiana, Mississippi, and Texas would fall under statewide federal oversight.

While members of the Congressional Black Caucus signaled their support for the legislation, according to National Journal, the Hispanic Caucus and civil rights organizations have expressed misgivings. Voter ID laws are exempted from the violations list, meaning restrictive changes passed in North Carolina, Texas, and elsewhere won’t be held against those states. “These [voter ID] laws make it harder for people of color to have a say in our democracy,” said Katherine Culliton-González, director of voter protection for the civil rights advocacy organization Advancement Project. “There’s no reason for this distinction. It’s arbitrary.” (Voter ID laws can still be blocked if the Department of Justice or federal courts deem them unfair; they just won’t count toward a state’s five-violation total.)

Culliton-González also took issue with a provision that only court rulings, not consent decrees or settlements, will count in a state’s violation total. Organizations like Advancement Project often settle voting rights lawsuits to get changes implemented faster, she said, whereas the proposed bill would incentivize drawing out court proceedings.

Still, Advancement Project and the ACLU have called the legislation an important first step. Provisions like the voter ID exemption may be necessary to win support from conservatives and other lawmakers from affected states, even if the legislation is a longshot to pass. For progressives on the fence, it’s a matter of how much they’re wiling to compromise to see a big element of the Voting Rights Act back in action.