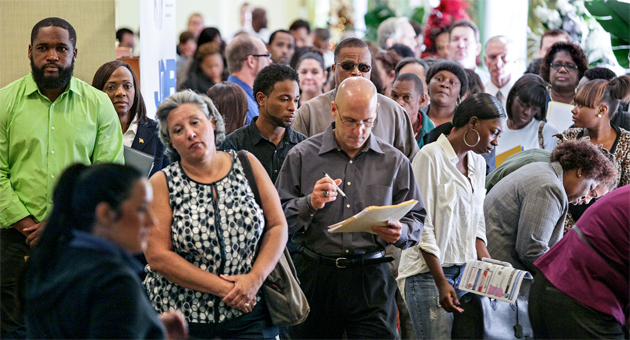 The Senate unexpectedly moved forward on extending much-needed unemployment insurance for the 1.3 million Americans who lost benefits shortly after Christmas. On Tuesday morning the extension cleared an early filibuster by a 60-37 vote, with six Republicans joining the Democrats in voting for advancement. The Emergency Unemployment Compensation Extension Act, introduced by Sen. Jack Reed (D-R.I.), extends benefits for the long-term unemployed for only three months—but 37 Republicans still voted to block debate on the bill. Some of those Republicans who blocked the bill represent states with the highest unemployment rates in the country.

Sen. Dean Heller (R-Nev.), the bill’s Republican cosponsor and one of the few GOPers to vote to move the bill towards final passage in the Senate, comes from a state with the worst unemployment rate in the United States—at 9 percent. It’s no surprise that he might vote to extend benefits to those Americans who have been out of the job for six months or more. But that doesn’t explain the no-votes from Republican Sen. Mark Kirk from Illinois, which has the fourth-worst unemployment rate—8.7 percent—and the two Republicans senators from Mississippi, which has an unemployment rate of 8.3 percent. Republicans have cited the high cost of the bill as the reason they don’t want to extend emergency benefits, although they’ve done so repeatedly in the past.

So what will happen now? The bill still has a long way to go before it passes the Senate. Some of the Republicans who voted for cloture on Tuesday might still join another filibuster against the final vote. Portman, for example, wants to proceed to debate but is demanding that the cost be offset if Democrats hope to win his vote next time. And even if the extension clears the Senate, it will likely flounder in the Republican-controlled House. In the meantime, as America continues to face the worst long-term unemployment crisis since the Great Depression, families who have been using the recession-era emergency benefits to scrape by will now fall even deeper into the poverty well. Last year, unemployment benefits helped lift 1.7 million people (including 446,000 children) out of poverty, according to the National Employment Law Project. As one New Yorker who has lost her benefits told Mother Jones, “I’m thoroughly petrified.”