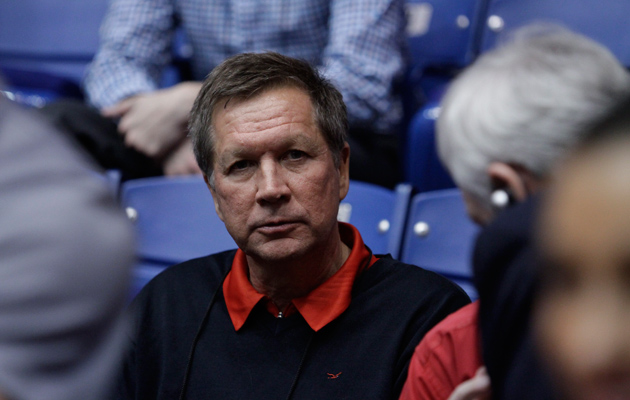 Under the Affordable Care Act, also known as Obamacare, the federal government is covering the vast majority of the cost of expanding Medicaid, the joint state-federal health insurance program for poor people, pregnant women, and infants. But conservatives in 24 states have blocked the program’s expansion—and taken aim at anyone who breaks with the party line. Their newest target: Ohio Republican Gov. John Kasich, who went around the state legislature last year to cover 275,000 more Ohioans. On Thursday, Ted Stevenot, the former president of the Ohio Liberty Coalition, a tea party group, announced he would take on Kasich in the May gubernatorial primary, provided he can collect 1,000 signatures by the end of the month. Per the Huffington Post:

Stevenot sent out a release late Wednesday night saying he would hold a press conference Jan. 7 in Columbus to make a “major announcement” concerning his candidacy. The announcement also noted that Brenda Mack of Canfield, Ohio, will be his running mate as lieutenant governor. She is the former president of the Ohio Black Republicans Association and the current president of the Frederick Douglass Foundation Ohio Chapter.

As my colleague Andy Kroll noted in May, conservative unrest over Kasich has been brewing for a while, with tea partiers even going so far as to threaten to form their own party to oppose him. But President Barack Obama won Ohio twice, and Kasich’s signature anti-union legislation was soundly defeated at the polls. That puts the governor in a bind as he heads into what was already expected to be a tough re-election fight next fall.

Still, Stevenot isn’t exactly Grover Norquist. The tea party leader has no political experience and only a very short history of political activism. At last count, had just 17 followers on Twitter. The big news here might not be that Kasich finally got a primary challenge—it’s that the primary challenger is (at first glance, at least) so underwhelming.