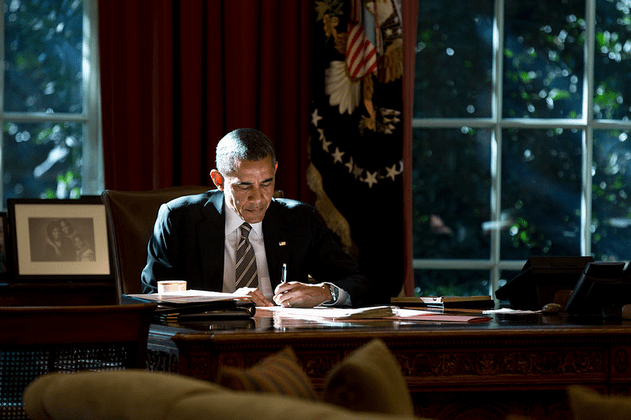 On Friday, President Obama released his plan to reform the NSA’s sweeping surveillance program. Obama offered much praise for the NSA, and he’s not ending the agency’s controversial bulk collection program, which scoops up information about Americans’ telephone calls. But he is making substantial changes to how the program currently runs, indicating that he may be more willing to risk the ire of the intelligence community for the sake of transparency reforms, than he’s been in the past. Many oversight questions, though, are still being left to the intelligence community, and the reforms Obama announced on Friday only address a sliver of the surveillance issues raised by the Snowden leaks. Most notably, the president did not address many of the internet-related revelations produced by the Snowden documents. But he tried to offer some real reform to civil libertarians (though hardly meeting the demands for widespread changes) while providing much support to the intelligence community, which will not likely cheer the reforms the president is implementing.

Bulk Phone Records Collection: Not Going Away, But More Hurdles for the NSA

The biggest change announced on Friday deals with the government’s practice of sweeping up Americans’ phone records in bulk—a practice that 60 percent of Americans oppose. Privacy advocates had hoped that Obama would take this opportunity to end the program. Instead, he announced that he’ll be making some big changes to how it operates. He ordered the attorney general and the Foreign Intelligence Surveillance Act court to implement a system in which NSA analysts must get approval from the FISA court to search the records. There will also be a new limit on the number of people the NSA can investigate via these records (“two steps removed from a number associated with a terrorist organization instead of three.”) These are significant changes—ones that could ruffle feathers at the NSA, which has claimed that any changes to the program would undermine its ability to combat terrorism. However, the real test will be whether the judicial review process will be stringent enough to satisfy critics. In the past, the FISA court has been criticized as a “rubber stamp” court.

Bulk Phone Records Storage: Going Somewhere, No One Knows Where

Obama ordered the intelligence community and the attorney general to come up with a new way to store phone records collected under the program, without having the government hold on to this data. This certainly will create some hurdles for the NSA, but it doesn’t mean that the NSA is no longer permitted to collect telephone records. It’s just about how they’ll be stored. While the intelligence community has to come up with recommendations before March 28, it’s entirely unclear when this policy will be implemented, because no third-party outside of phone companies—which have indicated they don’t want this responsibility—really exists.

Obama is making some modest changes to the process by which the government can use National Security Letters to compel businesses to secretly provide private records to federal investigators. Companies will now be able to disclose these requests—but at some yet-to-be determined point. The specifics are up to the attorney general. Privacy advocates will undoubtedly be disappointed by the fact that Obama is refusing to require judicial review before the government issues these secret orders.

The Top-Secret Spy Court: More Transparency, But Congress Should Figure It Out

Obama is asking the director of national intelligence and the attorney general to annually review which decisions made by the FISA court can be declassified. He is also asking Congress to put together a panel of advocates that will provide an independent voice in “significant cases before the court.” This is not quite as strong as having an in-house privacy advocate on every case, but it’s a serious change.

And…that’s pretty much it. Obama’s reforms don’t cover reports that the NSA has been working to undermine the internet’s encryption—such as by hacking into Google—and don’t entail a major overhaul of Section 702 of the FISA Amendments Act, which governs PRISM, the program that’s been accused of sweeping up internet communications. So it seems that any kind of online surveillance the government may be carrying out, will remain largely intact: “We’d hoped for, and the internet deserves, more,” says Alex Fowler, global privacy and policy leader? at Mozilla. “We’re concerned that the President didn’t address the most glaring reform needs.”

Obama maintains that there have been no alleged abuses of the telephone records collection program, which contradicts what the top-secret spy court has found. But his reforms indicate a greater willingness to reconsider aspects of the NSA’s surveillance programs, and they’ve somewhat exceeded expectations. He does say these reforms are only a start, which might be a small comfort to privacy advocates who are looking for much more.