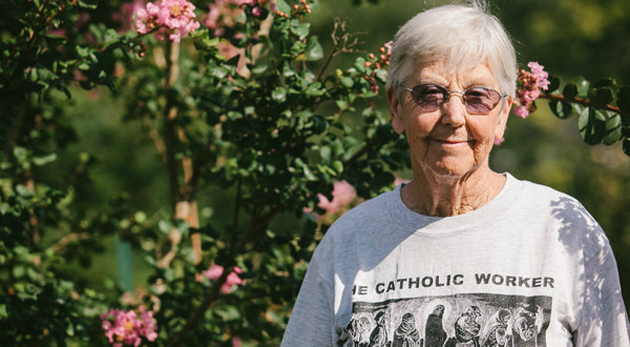 Update (2/18/2014): This afternoon, a federal judge in Knoxville, Tennessee, sentenced Sister Mary Rice to 35 months in prison. Her accomplices, Michael Walli and Greg Boertje-Obed, each received 62 months. “For now, their bodies remain in prison,” said Rice’s friend Ralph Hutchison, “but their voices are free, reminding us that…as long as the government continues to produce thermonuclear weapons of mass destruction in Oak Ridge or anywhere, people are required to resist.”

Nestled behind a forested ridgeline on the outskirts of Knoxville, Tennessee, is the sprawling Y-12 National Security Complex, America’s “Fort Knox” of weapons-grade uranium. The complex’s security cameras and machine gun nests are designed to repel an attack by the world’s most feared terrorist organizations, but they were no match for Sister Megan Rice, an 83-year-old Catholic nun armed with nothing more than a hammer and bolt cutters.

In the dark morning hours of July 28, 2012, Rice and two fellow anti-war activists bushwhacked up to the edge of Y-12, cut through three separate security fences, and sprayed peace slogans and human blood on the wall of a building that is said to hold enough weapons-grade uranium to obliterate human civilization several times over. (Click here to get the backstory on the blood.) They remained inside Y-12 for more than an hour before they were detected.

“The security breach,” as the Department of Energy’s Inspector General later described it, exposed “troubling displays of ineptitude” at what is supposed to be “one of the most secure facilities in the United States.” At a February hearing of the House Energy and Commerce Committee, multiple members of Congress thanked Rice for exposing the site’s gaping vulnerabilities. Eleven launch officers were targeted in a separate investigation of illegal drug use. But that didn’t deter federal prosecutors from throwing the book at Rice and her accomplices: Greg Boertje-Obed, a 57-year-old carpenter, and Michael Walli, a 63-year-old Vietnam veteran. They now sit in Georgia’s Irwin County Detention Center, awaiting a January 28 sentencing hearing where a federal judge could put them in prison for up to 30 years. (See update above.)

In May, the three activists were convicted of willfully damaging federal property and, more seriously, sabotaging national defense material—a charge that precludes them from being released on bail. It was the latest in a string of heavy-handed crackdowns on activists who’ve dared to engage in vital acts of civil disobedience. In 2011, for example, federal prosecutors charged internet activist Aaron Swartz with 11 violations of the Computer Fraud and Abuse Act carrying a maximum sentence of 35 years after he uploaded millions of papers from the scientific database JSTOR in a ploy to “liberate” publicly funded research; he hanged himself last January. Since September 2012, the journo-activist Barrett Brown has been imprisoned on a 17-count federal indictment related to his work exposing the surveillance of other activists by private government contractors. He faces a maximum 105-year prison sentence.

Even if the judge gives Sister Rice a more lenient sentence, as seems likely, she could still end up spending the rest of her life behind bars. “It’s of absolutely no consequence to her,” says her friend Ralph Hutchison, coordinator for the Oak Ridge Environmental Peace Alliance. “As a nun she believes strongly that she is called to be a servant of God wherever she is.”

Rice broke into the complex to bring attention to what she sees as its unlawful production of nuclear weapons. The Treaty on the Nonproliferation of Nuclear Weapons, signed by the United States in 1969, commits nations to “pursue negotiations in good faith on effective measures relating to cessation of the nuclear arms race at an early date and to nuclear disarmament.” Yet rather than phasing out nukes, the United States is refurbishing them at Y-12 and building a new $19 billion nuclear weapons production plant adjacent to the uranium facility. “You cannot simultaneously pursue nuclear disarmament credibly before the world,” Hutchison says, “while you are investing tens of billions of dollars in a new facility that is solely and exclusively dedicated to producing nuclear weapons.”

Multiple security cameras were broken for months, and the guards often disregarded motion sensor alarms, which were constantly being tripped by wildlife.

Regardless of whether US nukes are legal, Rice’s break-in underscores the frightening difficulty of securing them. The military has a troubling history of nuclear mishaps and security lapses, some of which it has lied about to save face. Just today, the Air Force announced that it had suspended and revoked the security clearances of 34 missile launch officers at its Malmstrom base in Montana after it came to light that they were cheating—or complicit in cheating—on monthly exams to ensure that they were capable in safely overseeing nuclear warheads.

The National Nuclear Security Administration spends $150 million a year on security at Y-12, but somehow failed to detect an incursion by three elderly people. The incident “represented multiple system failures on several levels,” noted the Inspector General’s report. Multiple security cameras, for instance, were on the fritz for months, and the facility’s guards often disregarded motion sensor alarms, which were constantly being tripped by wildlife. “It shows that if you throw a lot of money at stuff like this, it doesn’t necessarily solve the problem,” says Hans Kristensen, the director of the Federation of American Scientists’ Nuclear Information Project.

The nun incident is far from the first example of the mismanagement of America’s nuclear weapons stockpile. In 2007, as the investigative journalist Eric Schlosser reveals in his recent book, Command and Control, six hydrogen bombs went missing for a day and a half before the Air Force figured out what happened. It was “an incredibly serious security lapse,” Schlosser told one of my colleagues. “The fact that nobody was asked to sign for the weapons when they were removed from the bunker, the fact that nobody in the loading crew or on the airplane even knew that the plane was carrying nuclear weapons is just remarkable.”

A few years ago, Schlosser added, the Air Force lost communication with an entire squadron of 50 Minuteman nuclear missiles for more than an hour. In 2013, 17 missile launch officers were removed from duty for safety violations and a maintenance crew was decertified at the New Mexico base where the Air Force stores most of its nukes. “There’s a sense of a lack of direction, and mismanagement right now—particularly in the Air Force,” Schlosser said. “And it’s intolerable. It’s unacceptable.”

These kinds of lapses point to the fundamental irony of using a nuclear stockpile as a tool for national security: “You have to aim for perfection when you deal with nuclear weapons,” Kristensen says. “On the other hand, you can’t have a safety or inspection system that ever claims to be 100 percent. It will never happen.”

“They feel that nuclear weapons are the single greatest threat to God’s creation that exists in the world today,” says a fellow Plowshares activist.

The three imprisoned activists are members of the Plowshares Movement, a Christian peace initiative founded in 1980 when the brothers Daniel and Philip Berrigan and six others trespassed onto the General Electric nuclear missile facility in King of Prussia, Pennsylvania, and hammered on the nose cones of missiles. The movement takes inspiration from Isaiah 2:4: “And they will hammer their swords into plowshares”—the part of the plow that tills the soil. Plowshares actions typically involve the pouring of blood and the symbolic gesture of hammering weapons—in this case, the walls of the Y-12 uranium warehouse.

“They feel that nuclear weapons are the single greatest threat to God’s creation that exists in the world today,” Hutchison says. “They think that there is a faith imperative. Nuclear weapons represent the ultimate anti-God. Anything that God is for—compassion, hope, promise of a future, health, security—they think are completely contradictory to the idea of nuclear weapons.”