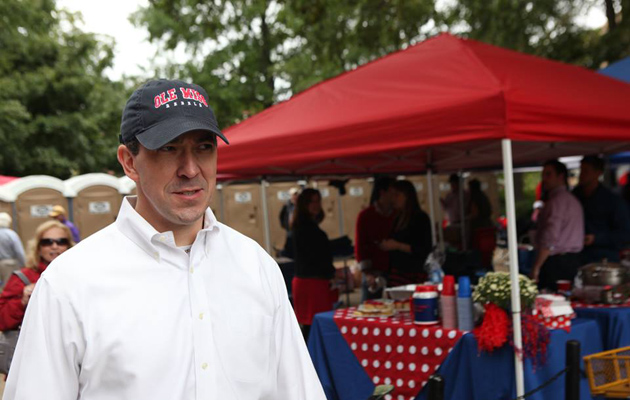 Political correctness is keeping Hollywood from properly stigmatizing Muslims—so said Mississippi Republican Senate candidate Chris McDaniel. He issued this complaint during a 2006 episode of Right Side Radio, a syndicated show McDaniel hosted for three years before being elected to the state Senate in 2007.

“It’s funny how the movies have portrayed themselves lately and how the video games have portrayed themselves lately,” McDaniel said in the segment. “There’s one person that cannot be a villain in Hollywood, ever. One group that cannot be villains. Who is that? [Cohost: The Muslims.] Yeah, isn’t that neat? They’ll go out of their way to find some Russian white guy that’s just nuts, and he’s the terrorist, which I’ve never seen that. But the Muslims, they’ve just disappeared from Hollywood’s radar.”

“I think the true enemy is Ron Howard and Andy Griffith,” he joked. (The remarks were first reported by a local politics blog, Dark Horse Mississippi.)

McDaniel didn’t have it quite right. Islamic extremists played the roles of terrorists in seasons two, four, and six* of the television show 24; the Showtime series Sleeper Cell; and a variety of movies, including Syriana, The Kingdom, Rules of Engagement, The Siege, True Lies, and Zero Dark Thirty. The Muslim-as-villain has been such a long-standing stereotype that a 1998 New York Times story reported on the difficulties Arab American actors faced in obtaining roles beyond that as hijackers.

Other audio clips unearthed by Dark Horse Mississippi feature McDaniel warning about the dangers of the “homosexual agenda” and describing a grand plan by Democrats to make “homosexual marriage and polygamy completely legal in all 50 states.” Speaking before the 2006 election, McDaniel rattled off a “parade of horribles” that would come to pass if Democrats (“the party of sex on demand”) took control of Congress; these included “new social taxes, new social programs,” and “new hate crime laws for homosexuals.”

In another episode of his radio show, McDaniel mocked San Francisco lawmakers who had decried an ad campaign depicting a white woman wrestling a black woman, under the slogan “White is coming.”

“They’re elite,” he said of the city’s residents, before taking a shot at the city’s LGBT community. “Right next to gender misidentification is IQ, I suppose. That’s gonna get me in trouble.”

*Correction: This story originally misidentified the villains in season five of 24.