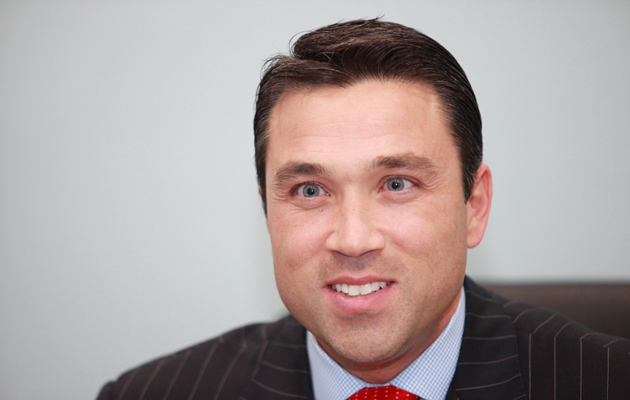 New York GOP Rep. Michael Grimm’s outburst after last night’s State of the Union was problematic because members of Congress (or anyone, really) aren’t supposed to threaten to throw reporters off balconies—at least not when a camera is rolling. But Grimm’s aggressive confrontation with NY1’s Michael Scotto also complicates an already difficult re-election campaign. Although the 11th district is New York City’s most conservative, it still voted for President Barack Obama by a 51–47 margin in 2012, making Grimm one of just a handful of Republicans representing blue-leaning districts. To that end, he was already one of the Democratic Congressional Campaign Committee’s top targets heading into 2014, even before he threatened to “break” Scotto “in half. Like a boy.” And unlike last cycle, when the Democratic nominee was dismissed as a former actor who lived with his dad, Grimm is facing a viable challenger in the form of former New York City council member Domenic Recchia Jr.

On Wednesday, Recchia was quick to pounce, issuing a statement blasting the incumbent:

Michael Grimm’s behavior last night was disgraceful, completely unacceptable, and unbefitting of a United States Congressman. Using threats of physical violence to intimidate the press from doing their jobs is against everything our country—and our government—stands for, and is a shameful abuse of power.

Michael Grimm owes Michael Scotto and the NY1 team an apology. He also owes the people of Staten Island and South Brooklyn an apology. The people of this district deserve leadership that in the wake of the President’s State of the Union is focused and committed to restoring the promise of the American Dream for all Americans. They deserve leadership that is focused on creating jobs, stimulating the economy, investing in transportation alternatives, and strengthening the middle class. Instead they’ve got Michael Grimm, who is clearly part of the distractions plaguing Congress, not the solutions. It’s time the people of this district had a representative focused on working for them.

Grimm already delivered on one of those apologies—on Wednesday he called Scotto to apologize.