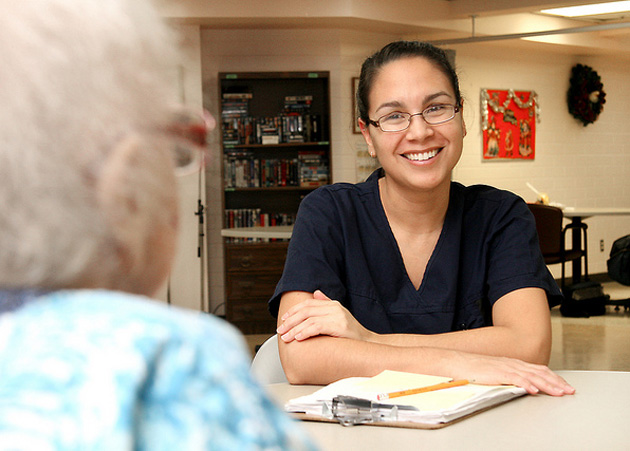 To help consumers and small businesses make sense of their new health insurance options, the Affordable Care Act created outreach personnel, or “navigators,” tasked with distributing information about coverage and walking people through the application process. On January 23, Texas passed a set of measures aimed at restricting these navigators because of lawmakers’ concerns about patient privacy. That same day, a federal judge in Missouri temporarily blocked enforcement of similar restrictions, ruling that they created too large an obstacle to enrollment.

“It is an abuse of your oversight authority to launch groundless investigations into civic organizations that are trying to make health reform a success.”

This tug of war is about a seemingly straightforward program: The navigators, who are required by law to be both unbiased and free, are meant to help uninsured Americans enroll in either Medicaid or private insurance plans. Depending on whether a state has opted to use its own insurance marketplace, navigators get funding through state or federal grants. For example, Planned Parenthood of the Heartland, in Iowa, received a $214,427 grant from the Department of Health and Human Services (HHS) to employ navigators, which will give in-person assistance by preparing applications and helping consumers determine which plans they qualify for, in 61 of 99 Iowa counties.

But Republican lawmakers have cried foul, arguing that navigators could steal private information like Social Security numbers and medical records. In an August letter to Kathleen Sebelius, the secretary of the HHS, the attorneys general of 13 states said they were concerned that HHS had “failed to adequately protect the privacy” of consumers because it does “not even require uniform criminal background or fingerprint checks before hiring personnel.” Texas Sen. John Cornyn, for example, praised his state’s regulations, saying on his Facebook, “Obamacare presents enough problems for Texans without the risk of a convicted felon handling their personal information.”

Privacy claims have led to a surge of restrictive measures like those in Texas. At least 17 states have passed regulations on health care navigators since, including Georgia, Ohio, and Tennessee, which barred navigators from educating consumers about the specific benefits, terms, and features of a particular health plan. Here is a map of states that have passed laws restricting navigators: 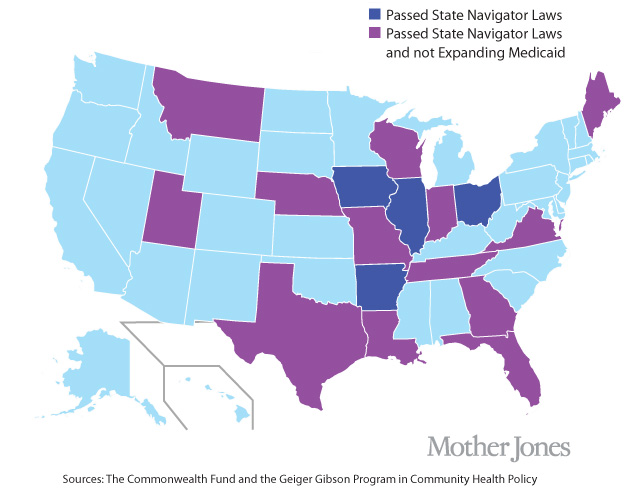 Many policymakers and health care professionals say that these privacy concerns are unfounded and worry that partisan bickering will hurt underserved populations. After 15 Republicans members of the House asked for details and briefings on 51 navigator groups, Rep. Henry Waxman (D-Calif.) wrote, “It is an abuse of your oversight authority to launch groundless investigations into civic organizations that are trying to make health reform a success.” The Democratic members of the Committee on Energy and Commerce also noted that there are already significant privacy safeguards in place, including a $25,000 penalty for disclosing personal information and mandatory navigator training.

Peter Shin, professor of health law and policy George Washington University’s School of Public Health and Health Services, says that conservatives are more interested in decreasing enrollment and making Obamacare look bad than they are in protecting patient privacy. “I think the privacy concern is more of a political issue than a common sense one,” says Shin.

The result of conservative politicking? Underserved populations will remain so, as outreach resources are strained. “The purpose of the navigator programs is to help those who will need most in terms of understanding their options,” says Shin. “The more disenfranchised communities will be hurt the most from the navigator restrictions.”

Several navigator programs have already closed shop because of anti-navigator laws. Cardon Outreach, a Texas-based organization that has helped people enroll in Medicaid in the past, returned its grant from HHS. As the Columbus Dispatch reported, Cardon’s chief legal adviser stated in an email that the state and federal regulatory scrutiny surrounding navigators “requires us to allocate resources which we cannot spare and will distract us from fulfilling our obligations to our clients.”