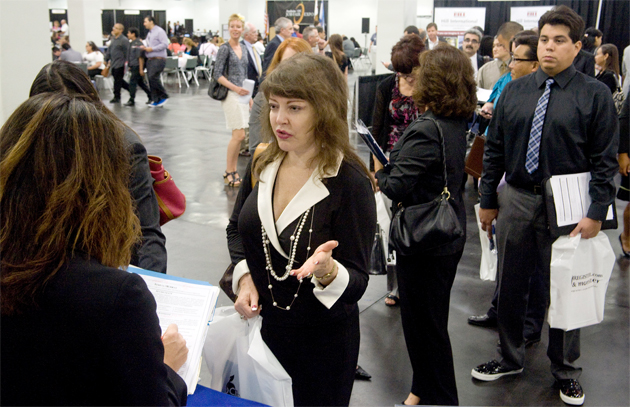 The economy added just 74,000 jobs in December, which was fewer than expected, according to new numbers released by the Labor Department on Friday. The unemployment rate dropped to 6.7 percent. But as has been the case in previous months, this drop is due largely to the fact that many Americans left the labor force, and thus were not officially counted as unemployed by the government.

The number of jobs added in December was the smallest monthly gain in three years. Gains of over 200,000 jobs had been expected.

In December (as in November), 7.8 million Americans were employed in part-time work because they could not find full-time jobs.

As in previous months, employment increased in low-wage service jobs. Jobs in retail, including in restaurants, bars, and clothing stores, rose by 55,000 in December. Temp work gained 40,000 jobs.

The number of long-term unemployed—those without a job for 27 weeks or more—remained at a whopping 37.7 percent of the unemployed last month. Federal unemployment benefits for the long-term jobless expired at the end of the year. The Senate recently voted to consider a bill renewing these benefits, but it is unclear if Republicans in the Senate and House will approve a final bill.

If Congress does not renew the benefits, we may see an even greater shrinkage in the labor force, as the long-term unemployed, who are some of the least employable Americans, no longer have the means to continue searching for jobs.