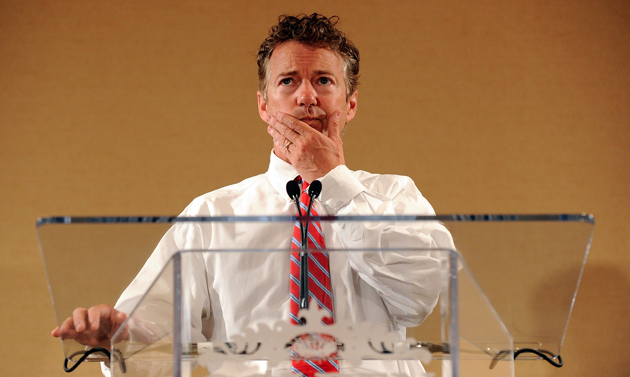 On Monday, Mother Jones profiled North Carolina Senate hopeful Greg Brannon—a Republican primary candidate who believes public education is dehumanizing and Marxist, and who recently cosponsored a rally with a secessionist group, the League of the South, which seeks “a free and independent Southern republic.” Brannon feels bipartisan compromises in Washington “enslave” Americans. He prefers the governing style of his “modern hero” Jesse Helms—a North Carolina senator of 30 years best known for refusing, even until the day he died in 2008, to renounce his support for racial segregation.

Sen. Rand Paul, among other big-name conservatives, has endorsed Brannon as the best candidate to challenge vulnerable Democratic Sen. Kay Hagan next fall. And while Paul’s office didn’t respond to requests for comment for that profile, a photo posted on Paul’s Facebook page Monday evening reiterated Paul’s support for Brannon and his campaign.

“Greg Brannon is the type of 100% fight to repeal ObamaCare conservative I need in the U.S. Senate,” read the caption, under a composite photograph that showed a smiling Paul next to Brannon. “Support his ‘Retreat is NOT an Option Money Bomb’ by clicking the link below.” The caption linked to a page on Brannon’s website where supporters could donate to Brannon’s ten-day “Money Bomb” campaign. The fundraiser, which ended Monday night, aimed “to fight back against Karl Rove and the DC Insiders who are determined to silence grassroots conservatives,” a reference to Rove’s work for one of Brannon’s primary opponents.

In a recent survey conducted by Public Policy Polling, Brannon was the only Republican who beat Hagan in a head-to-head matchup. When PPP polled Republican primary voters on the four GOP candidates, North Carolina Speaker of the House Thom Tillis ran 9 points ahead of Brannon—but nearly half of those voters said they were undecided.