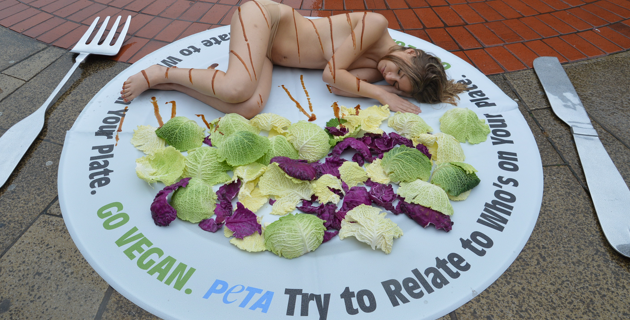 PETA to women: "Try to look more like her."UPPA/ZUMA Press

Update (12/2/2013): John Seager, the president of Population Connection, has responded to PETA’s campaign in an email: “It would be unfortunate if the importance of access to and consistent use of modern contraception gets lost in some wide-ranging discussion about everything under the sun, including the many positive benefits of a vegan diet.”

Last week, when Mother Jones reported that some popular emergency contraceptive pills may not work in women weighing more than 176 pounds, many reporters and commentators immediately interpreted this as bad news for women who are “fat” or “obese.”

And it wasn’t just Rush Limbaugh making that assumption. Annie-Rose Strasser at ThinkProgress did the yeoman’s work of rounding up media coverage that said the news affected “overweight” or “obese” women and found that CNN, NPR, The Guardian, and The Examiner were all offenders.

Reporters are wrong to suggest that the limits of Plan B and similar emergency contraceptives affect only women who are overweight. The CEO of HRA Pharma, a French company that is changing the labels on its emergency contraceptive pills to warn women of weight limits, told Mother Jones that the pill’s efficacy is linked to weight—not body mass index, an obesity measure. In other words, the weight limit would equally affect a tall woman whose weight is in what doctors consider a healthy range and a shorter, overweight woman. Amanda Marcotte points out at RH Reality Check that a six-foot-plus woman who weighs 176 pounds will fall far short of fitting the medical definition of “obese.”

Yet on Monday, a major advocacy group seized on the notion that women who can’t effectively use Plan B are simply too fat. People for the Ethical Treatment of Animals launched a campaign Monday, pegged to Mother Jones‘s reporting, that encourages women to lose weight with vegan diets and “regain control over their reproductive lives.” In a press release, PETA announced that the program, “Plan V” will promote a vegan diet as a “Plan B lifeline for overweight women.”

“If extra pounds are thwarting a woman’s ability to use Plan B, PETA’s ‘Plan V’ could be the prescription they need,” PETA executive vice president Tracy Reiman said in a press release. The release also says that PETA president Ingrid E. Newkirk sent a letter to Population Connection, a contraception advocacy group, asking for help promoting “Plan V.” In her letter, Newkirk explains the program “will encourage women to adopt a healthy vegan diet in order to lose weight and so take control of their reproductive rights.”

Of course, it is not necessarily healthy for all women who weigh more than 176 pounds to try to lose weight. Asked to comment on the distinction between women who are overweight and women who are simply heavier, Alicia Woempner, PETA’s special projects manager, sent the following in an email:

“At 6 feet tall, I currently weigh about 150 pounds, which is a healthy weight for me—but I used to weigh more than 200 pounds, which is well above the threshold for Plan B. As a vegan, I lost 70 pounds and have kept them off. I’m grateful to know that Plan B emergency contraception is now an option for me, but it is essential for women of all heights and weights to have access to family-planning tools, so I hope that Plan B can be modified to work for everyone. In the meantime, adopting a healthy vegan diet is a great way for the vast majority of women to get their weight well within the current threshold as well as to reduce their risk of heart disease, diabetes, and cancer. I encourage all women to take their health into their own hands by going vegan.”

PETA’s campaign isn’t as offensive as, say, the comments section below the original Mother Jones article, where readers used any number of adjectives that don’t merit repeating to describe heavier women. But as this initiative is premised on a serious misrepresentation of Mother Jones‘s reporting, it boils down to the same thing—fat-shaming.