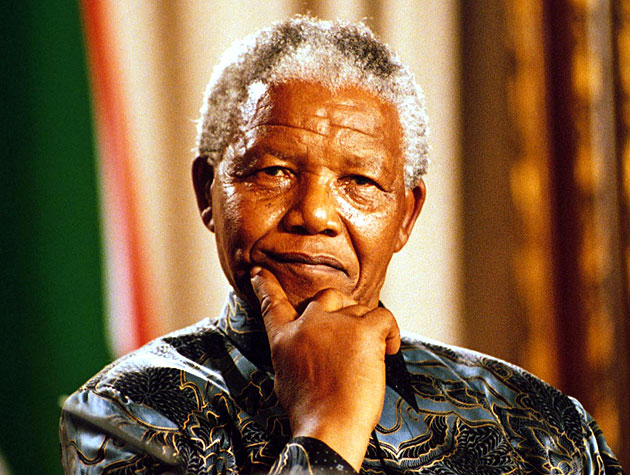 “My Lord, I am the First Accused.” Those were Nelson Mandela’s opening words as he stood in the dock in the Palace of Justice in Pretoria, South Africa, on the morning of April 20, 1964—nearly half a century before his death December 5 at the age of 95. Mandela and eight other defendants had been charged with violating the Sabotage Act and the Suppression of Communism Act, accused of plotting violence against the apartheid government with the aim of overthrowing it. By fomenting “chaos, turmoil, and disorder,” the prosecutor explained, the accused hoped to achieve “liberation from the so-called yoke of the white man’s domination.” Mandela, who was already serving a five-year sentence for organizing a strike and leaving the country without a passport, assumed that they would be sent to the gallows.

With the verdict all but certain, Mandela and his codefendants decided to turn their trial into an indictment of the apartheid state. When he had been asked for his plea, Mandela replied, “The government should be in the dock, not me. I plead not guilty.” Yet the lengthy statement he prepared to open his defense was not an attempt to prove his innocence—in fact, he readily admitted to many of the charges made against him. He instead took the opportunity to forcefully promote his cause. But he also knew that he was offering a doomed man’s final words, in essence, a self-written epitaph.

Mandela took two weeks to write the speech. A white lawyer who reviewed a draft exclaimed, “If Mandela reads this in court they will take him straight out to the back of the courthouse and string him up.” Mandela’s own lawyer urged him to cut out the final paragraph, but Mandela held firm. “I felt we were likely to hang no matter what we said, so we might as well say what we truly believed,” Mandela recalled in his autobiography, Long Walk to Freedom. The final lines of Mandela’s 60-page, 176-minute statement have since become its most famous:

During my lifetime I have dedicated my life to this struggle of the African people. I have fought against white domination, and I have fought against black domination. I have cherished the ideal of a democratic and free society in which all persons will live together in harmony and with equal opportunities. It is an ideal for which I hope to live for and to see realized. But, My Lord, if it needs be, it is an ideal for which I am prepared to die.

Those lines will no doubt be reprinted in many of Mandela’s obituaries. (They also provide the climax of the trailer for the new Mandela biopic starring Idris Elba.) But the rest of his speech at the Rivonia trial is worth reading. It not only provides the context behind its most quotable section but also says much about who Mandela was—and would be when he emerged from prison nearly three decades later.

Today, Mandela is remembered as a champion of reconciliation and peaceful transition to democracy. But it bears remembering that he saw limits to Gandhi-esque nonviolence, and that he did not renounce “armed struggle” until the apartheid government agreed to negotiate. His trial statement began with a lengthy discussion of why he and other leaders of the anti-apartheid African National Congress had decided to move away from their commitment to nonviolent struggle. Specifically, they had secretly organized a resistance group, Umkhonto we Sizwe (Spear of the Nation) to a launch campaign of sabotage and guerilla warfare against the state.

Some of the things so far told to the Court are true and some are untrue. I do not however, deny that I planned sabotage. I did not plan it in a spirit of recklessness, nor because I have any love for violence. I planned it as a result of a calm and sober assessment of the political situation that had arisen after many years of tyranny, exploitation, and oppression of my people by the whites.

[…] I have already mentioned that I was one of the persons who helped to form Umkhonto. I, and the others who started the organization, did so for two reasons. Firstly, we believed that as a result of Government policy, violence by the African people had become inevitable, and that unless responsible leadership was given to canalise and control the feelings of our people, there would be outbreaks of terrorism which would produce an intensity of bitterness and hostility between the various races of the country which is not produced even by war.

Secondly, we felt that without sabotage there would be no way open to the African people to succeed in their struggle against the principle of white supremacy. All lawful modes of expressing opposition to this principle had been closed by legislation, and we were placed in a position in which we had either to accept a permanent state of inferiority, or to defy the Government. We chose to defy the Government. We first broke the law in a way which avoided any recourse to violence; when this form was legislated against, and when the Government resorted to a show of force to crush opposition to its policies, only then did we decide to answer violence with violence.

But the violence which we chose to adopt was not terrorism. We who formed Umkhonto were all members of the African National Congress, and had behind us the ANC tradition of nonviolence and negotiation as a means of solving political disputes. We believed that South Africa belonged to all the people who lived in it, and not to one group, be it black or white. We did not want an inter-racial war, and tried to avoid it to the last minute.

Mandela’s insistence that a campaign of limited armed action would not cause unnecessary casualties or devolve into civil war was optimistic. Yet the logic behind the decision to take up arms was Jeffersonian: Their repeated petitions answered only by repeated injury, what further options did black South Africans have?

Mandela also offered a detailed response to the charges that he and the ANC were, as the prosecutor put it, “communistically inclined”, which included gracefully comparing his adversaries to Hitler:

It is true that there has often been close cooperation between the ANC and the Communist Party. But cooperation is merely proof of a common goal—in this case the removal of white supremacy—and is not proof of a complete community of interests.

My Lord, the history of the world is full of similar examples. Perhaps the most striking illustration is to be found in the cooperation between Great Britain, the United States of America, and the Soviet Union in the fight against Hitler. Nobody but Hitler would have dared to suggest that such cooperation turned Churchill or Roosevelt into communists or communist tools, or that Britain and America were working to bring about a communist world. 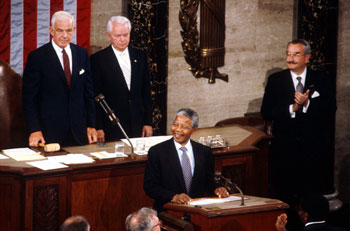 In 1964, Nelson Mandela expressed his admiration for “the American Congress.” In 1990 he addressed a joint session. Pamela Price/ZUMAPRESS.com

Yes, Mandela said, he had made common cause with communists to defeat apartheid, but he was not himself a communist. Technically, this wasn’t entirely true: According to recent research, Mandela briefly joined the South African Communist Party during the early ’60s to facilitate his underground organizing. But in court he made clear that he was a democratic socialist, elucidating why he did not share the communists’ vision for a post-apartheid South Africa:

But from my reading of Marxist literature and from conversations with Marxists, I have gained the impression that communists regard the parliamentary system of the work—of the West as undemocratic and reactionary. But, on the contrary, I am an admirer of such a system.

The Magna Carta, the Petition of Rights, the Bill of Rights are documents which are held in veneration by democrats throughout the world.

I have great respect for British political institutions, and for the country’s system of justice. I regard the British Parliament as the most democratic institution in the world, and the independence and impartiality of its judiciary never fail to arouse my admiration.

The American Congress, that country’s doctrine of separation of powers, as well as the independence of its judiciary, arouse in me similar sentiments.

I have been influenced in my thinking by both West and East. All this has led me to feel that in my search for a political formula, I should be absolutely impartial and objective. I should tie myself to no particular system of society other than that of socialism. I must leave myself free to borrow the best from West and from the East.

The anti-apartheid movement’s fight, Mandela continued, was not against whites, but the poverty, violence, and indignity caused by white supremacy—”and we do not need communists or so-called ‘agitators’ to teach us about these things.” In the paragraphs leading up to his fate-tempting conclusion, Mandela sketched out a vision of democracy in which race-based politics would become irrelevant: 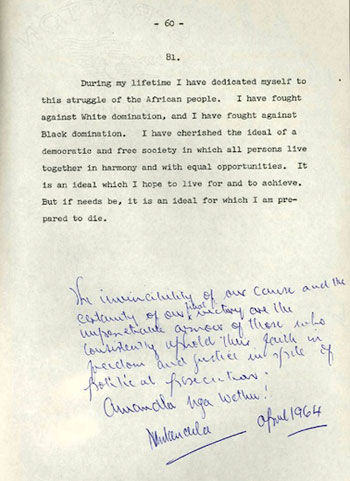 Above all, My Lord, we want equal political rights, because without them our disabilities will be permanent. I know this sounds revolutionary to the whites in this country, because the majority of voters will be Africans. This makes the white man fear democracy.

But this fear cannot be allowed to stand in the way of the only solution which will guarantee racial harmony and freedom for all. It is not true that the enfranchisement of all will result in racial domination. Political division, based on color, is entirely artificial and, when it disappears, so will the domination of one color group by another. The ANC has spent half a century fighting against racialism. When it triumphs as it certainly must, it will not change that policy.

The speech, delivered in Mandela’s characteristically deliberate style (listen to excerpts here, here, and here), marked the boundaries of his idealism and pragmatism, his militancy and moderation, his courage and caution. The manifesto remains one of the clearest political portraits of Mandela, whose revolutionary past seemed to fade as he became a global icon, a genial grandpa who sat for photo-ops with an endless parade of celebrity well-wishers.

On June 11, 1964, Judge Quartus de Wet ruled that Mandela and seven of his codefendants were guilty. The following day, he delivered his sentence. Noting that the state had accused the defendants of high treason without formally charging them with such, de Wet decided “not to impose the supreme penalty.” Instead, they would receive life imprisonment. He had spared Mandela from martyrdom, but condemned him—and South Africa—to endure many dark years before witnessing the dream described by a man who could not have imagined he had nearly 50 more years to live.