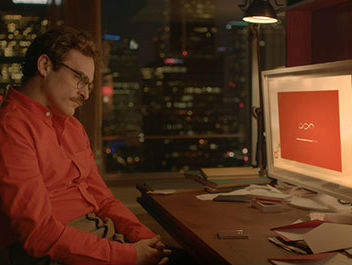 Spike Jonze’s Her (Warner Bros., 126 min.) is being hailed as one of the funniest, most delightful, and best films you’ll see all year. It’s also the only one in which you’ll get to see Joaquin Phoenix have sex with a computer.

The sci-fi romance is set in futuristic Los Angeles and tells the story of Theodore Twombly (Phoenix), a heartbroken man who falls in love with Samantha, the disembodied voice and personality of his computer and smartphone operating system. The “OS” (voiced by Scarlett Johansson) engages in a lot of playful, affectionate, and human conversation with Theodore, and you can listen to some of it here:

Samantha and Theodore do all the serious-relationship-y stuff that comes standard: They go on double dates, embark on mild adventures, argue from time to time, and, yes, make glorious love. (Theodore has something of an out-of-body experience when they consummate their relationship.)

Understandably, the fictional Samantha has attracted comparisons to the real-life Siri, which is the artificially intelligent, often female-voiced personal assistant that is supported on many of Apple’s iPhones and iPads. You can ask Siri to do things for you and you can have conversations with Siri. Siri is also known for its love of libertarian icon Ron Paul, and for advising a befuddled Zooey Deschanel.

So, yeah, Samantha is like a super-advanced Siri, voiced by ScarJo. (Jonze’s story was actually first inspired by instant-messaging technology that he discovered years before Siri came along.) “Some filmmakers create art that reflects the world [while] Spike Jonze (Being John Malkovich, Adaptation) creates movies that make us see the world in startling new ways,” gushed Rolling Stone critic Peter Travers. Fair enough. But did all his years of bringing Her to life lead Jonze to view the world—specifically, technology like Siri and Samantha—in a new light? Jonze was nice enough to humor me about this subject when he was in Washington, DC, last week for a Q&A session. Our conversation is posted below.

Me: After spending so much time making this movie, do you now look at, say, Siri any differently, whether sexually, emotionally, or intellectually?

Jonze: All the above! (Chuckles.) Actually, no, not at all. I mean, it’s such a different thing [from what’s in Her]. And Siri, it doesn’t really do all that much. So… no.

There you have it, in case you were dying to know.