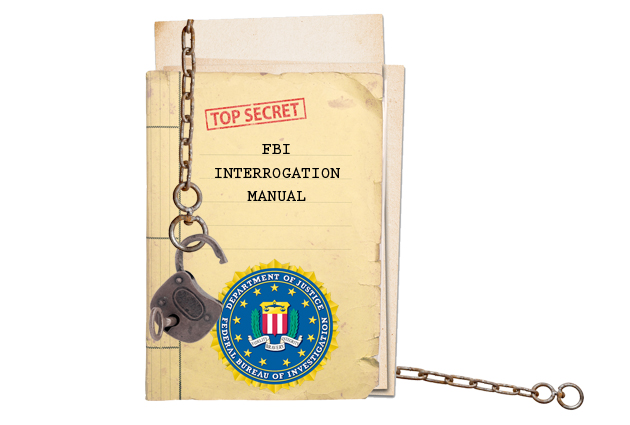 In a lapse that national security experts call baffling, a high-ranking FBI agent filed a sensitive internal manual detailing the bureau’s secret interrogation procedures with the Library of Congress, where anyone with a library card can read it.

For years, the American Civil Liberties Union fought a legal battle to force the FBI to release a range of documents concerning FBI guidelines, including this one, which covers the practices agents are supposed to employ when questioning suspects. Through all this, unbeknownst to the ACLU and the FBI, the manual sat in a government archive open to the public. When the FBI finally relented and provided the ACLU a version of the interrogation guidebook last year, it was heavily redacted; entire pages were blacked out. But the version available at the Library of Congress, which a Mother Jones reporter reviewed last week, contains no redactions.

The 70-plus-page manual ended up in the Library of Congress, thanks to its author, an FBI official who made an unexplainable mistake. This FBI supervisory special agent, who once worked as a unit chief in the FBI’s counterterrorism division, registered a copyright for the manual in 2010 and deposited a copy with the US Copyright Office, where members of the public can inspect it upon request. What’s particularly strange about this episode is that government documents cannot be copyrighted.

“A document that has not been released does not even need a copyright,” says Steven Aftergood, a government secrecy expert at the Federation of American Scientists. “Who is going to plagiarize from it? Even if you wanted to, you couldn’t violate the copyright because you don’t have the document. It isn’t available.”

“The whole thing is a comedy of errors,” he adds. “It sounds like gross incompetence and ignorance.”

Julian Sanchez, a fellow with the libertarian Cato Institute who has studied copyright policy, was harsher: “Do they not cover this in orientation? [Sensitive] documents should not be placed in public repositories—and, by the way, aren’t copyrightable. How do you even get a clearance without knowing this stuff?”

The FBI agent who registered for the copyright did so under his own name—effectively claiming the rights for himself, not the FBI. An FBI spokesman told Mother Jones the bureau has been made aware of the matter but “cannot provide any further information at this time regarding this subject.”

The version of the interrogation manual the agent deposited with the copyright office is dated August 18, 2008, but it wasn’t filed until January 2010. The redacted version released to the ACLU is dated February 23, 2011.

Because the two versions are similar, a side-by-side comparison allows a reader to deduce what was redacted in the later version. The copyright office does not allow readers to take pictures or notes, but during a brief inspection, a few redactions stood out.

The ACLU has previously criticized the interrogation manual for endorsing the isolation of detainees and including favorable references to the KUBARK manual, a 1963 CIA interrogation guidebook that encouraged torture methods, including electric shocks. The group has also expressed concern that the manual adopts aspects of the Reid Technique, a common law enforcement interview method that has been known to produce false confessions. A redacted sentence in the manual says the document is intended for use by the FBI’s “clean” teams—investigators who collect information intended for use in federal prosecutions. That raises the question of whether teams collecting information that’s not for use in federal courts would have to follow the manual’s (already permissive) guidelines at all.

Another section, blacked out in the version provided to the ACLU, encourages FBI agents to stage a “date-stamped full-body picture” of a detainee, complete with a bottle of water, for use in refuting abuse allegations at trial.

Yet the most eyebrow-raising thing about the unredacted version may be that it was available for public consumption for years. The inadvertent release of sensitive information “is not supposed to happen but it does,” Aftergood says. “Security screwups are not very uncommon. But this is a first.”