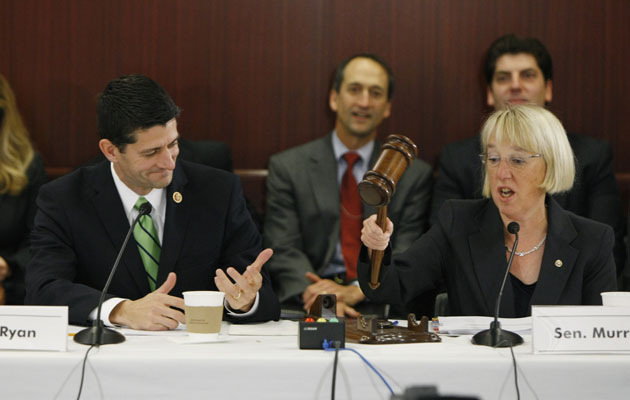 Hooray! Our dysfunctional, divided Congress managed to accomplish something. On Wednesday, the Senate approved a budget deal hammered out by Rep. Paul Ryan (R-Wis.) and Sen. Patty Murray (D-Wash.) by a 64-36 vote. Nine Republicans joined all of the Senate’s Democrats in voting for the resolution. Since the House already passed the accord it will soon become official, pending President Barack Obama’s signature.

The new budget, which sets government spending levels for the next two years, has been hailed as a breakthrough—a deviation from the gridlock and last-minute spending deals that have plagued Congress since the 2010 election. The consensus fetishists of Washington love the deal, and are suggesting it means we can say goodbye to any threat of government shutdowns until at least late 2015. Congress can just wipe its hands clean of past debacles and head home for an easy holiday break.

The truth? It’s a tad more complicated. It’s unlikely there will be another shutdown when funding expires on January 15: Republican support for the budget deal is a clear sign that they’ve learned their lesson about closing the government after their October debacle. But fights over federal spending have hardly been settled. The Ryan-Murray budget offers a broad framework for the budget numbers, but the details still need to be worked out. And there are a host of difficult decisions awaiting.

The new budget sets the top-line numbers for government spending in 2014 and 2015. In 2014, the military will get $520 billion and discretionary domestic programs will get $492 billion. While those figures represent a partial rollback of sequestration—the painful, across-the-board cuts dictated by 2011’s Budget Control Act—the new plan still requires that the federal budget be reduced from pre-sequester levels by $46 billion. Since the Ryan-Murray budget doesn’t allocate funds to specific programs, those hard choices are left to the House and Senate appropriations committees. And they don’t have much time: Those lawmakers must shepherd bills through Congress in the next month, before that January 15 deadline.

“Certainly getting an omnibus appropriations bill—a 12-bill omnibus that will spend over a trillion dollars—through Congress is not going to be an easy process,” says Harry Stein, a fiscal policy expert at the liberal think tank Center for American Progress. “I expect it will pass, but it will be a contentious process because there are going to be a lot of losers as a result of this deal. You’re cutting spending by quite a bit.”

Staff from the appropriations committees are reportedly already at work on crafting an agreement, and aim to introduce an omnibus spending bill shortly after Congress returns from its holiday break. If they fail, they could rush out a continuing resolution to buy themselves extra time.

“It will be difficult,” says Joel Friedman, vice president for federal fiscal policy at the Center on Budget and Policy Priorities. “They’ve added back some, but not the full amount of the sequester cuts. There will continue to be unmet needs. Not everybody is going to get the level of funding that they would like out of this.”

The sequester cuts offered members of Congress an easy excuse when cornered by constituents angry over whacked budgets for Head Start or military bases: It’s not our fault. Sequestration demanded reductions across the board, allowing individual lawmakers to pass the blame. “They didn’t have to vote for each specific cut,” says Stein. “With an omnibus appropriations bill, they have to sign their name on every single cut.”

Over the summer, before the Ryan-Murray compromise emerged, the appropriations committees in both the House and Senate set to work on their own budgets, each of which took dramatically different approaches to wrestling with the sequester’s spending reductions.

“Now they’re going to have to find $46 billion…That won’t be easy at all.”

The House’s accepted that the sequester cuts would endure. But instead of evenly distributing those cuts across all programs as originally envisioned, they restored military funding and decimated domestic spending. That tactic proved untenable, though, as Republican representatives balked when the kind of steep cuts long favored by Ryan’s white papers were explicitly spelled out in legislation. Those divisions boiled into open conflict when Republican leadership realized they couldn’t pass the funding bill for the departments of Transportation and Housing and Urban Development. “I believe that the House has made its choice: Sequestration—and its unrealistic and ill-conceived discretionary cuts—must be brought to an end,” Rep. Hal Rogers (R-Ky.), chair of the House’s appropriations committee, said in late July.

Senate appropriators, on the other hand, assumed the sequester’s cuts would go away. For that reason— and since Ryan-Murray evenly distributes sequester relief between domestic and military programs, like the Senate’s committee’s working budget—their bills will likely form the basis for negotiations over the next month.

But under Ryan-Murray, the Senate’s already lean plan will have to be cut by another $46 billion. “There’s really not a lot of fat left to trim,” says Stein. “It’s important to remember that we’ve already cut about $1.5 trillion over 10 years of discretionary spending, not counting the sequester.”

“The people that care about housing programs, infrastructure programs, medical research, education, and so forth,” continues Stein, “weren’t thrilled with the numbers in the Senate except they were just so much better than the alternative in the House. Now they’re going to have to find $46 billion with already a fairly austere allocation. That won’t be easy at all.”