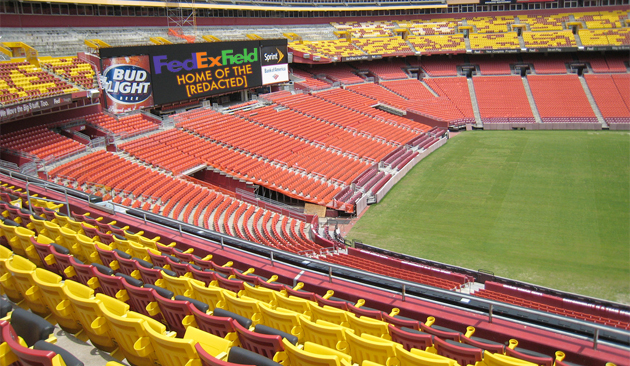 As more and more people have called for Washington’s pro football team to change its name, some folks have argued that the only way to get owner Dan Snyder to listen is to go after his wallet. That’s right: Boycott the team or, failing that, target its corporate sponsors.

On its official website, the team displays five of its largest partners: Ticketmaster, FedEx Express, Bud Light, Ameritel Corporation, and Bank of America. Mother Jones reached out to each of these sponsors, as well as a few others, to see if they had any comment on the campaign to push Snyder to drop the R-word—and whether they had considered dropping their sponsorship because of the controversy. Here’s what their spokespeople had to say:

Coca-Cola: “As sponsors, we do not play a role in decisions regarding NFL trademarks. Your questions can be better addressed by the team and the NFL.”

FedEx: “We understand that there is a difference of opinion on this issue. Nevertheless, we believe that our sponsorship of FedEx Field continues to be in the best interests of FedEx and its stockholders.”

New York Life: “The company has received no complaints. The company plans to assess the sponsorship at the conclusion of the season.”

Virginia Lottery: “We have not received complaints regarding the Redskins sponsorship and we are not considering dropping it.”

Ticketmaster: “We are declining to comment, but perhaps their sponsor StubHub would have something to say about this. StubHub is located right there in San Francisco.”

Thanks for the suggestion, Ticketmaster PR! Unfortunately, StubHub—like Ameritel, Anheuser-Busch, and Bank of America—did not respond to repeated requests for comment.