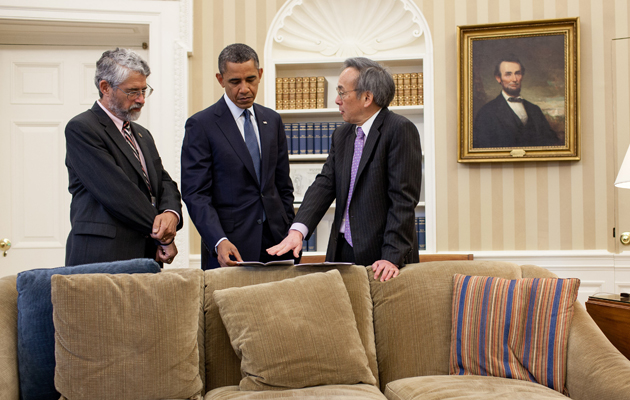 Politico’s Glenn Thrush has a revealing new piece on the pressures of being in President Obama’s cabinet—a supposedly fun thing most of its members will never do again. There a lot of nuggets in there, but one in particular stood out: the White House’s private outrage at former Secretary of Energy Steve Chu’s impromptu decision to talk about climate change while visiting an island nation uniquely threatened by it. On a trip to Trinidad and Tobago with the president, a staffer persuaded press secretary Robert Gibbs to let Chu answer a few questions:

Gibbs reluctantly assented. Then Chu took the podium to tell the tiny island nation that it might soon, sorry to say, be underwater—which not only insulted the good people of Trinidad and Tobago but also raised the climate issue at a time when the White House wanted the economy, and the economy only, on the front burner. “I think the Caribbean countries face rising oceans, and they face increase in the severity of hurricanes,” Chu said. “This is something that is very, very scary to all of us…The island states…some of them will disappear.”

Earnest slunk backstage. “OK, we’ll never do that again,” he said as Gibbs glared. A phone rang. It was White House chief of staff Rahm Emanuel calling Messina to snarl, “If you don’t kill [Chu], I’m going to.”

Emanuel didn’t kill Chu, although that would have made for a more interesting story.

A couple things stand out here. Trinidad and Tobago is seriously threatened by climate change, and given the efforts of similarly situated island nations—the Maldives, Tuvalu—to call attention to the crisis, it’s hardly an insult to use the occasion of a trip to the country to talk about it. (Port of Spain, Trinidad and Tobago’s capital, is 10 feet above sea level.) But this underscores just how narrow the White House’s thinking was at that time. Does anyone actually remember Steven Chu speaking out about sea level rises in Trinidad and Tobago? Did it really distract from the president’s economic message? Were there mass protests in the streets of Port of Spain? Did it delay pending legislation or result in any electoral setbacks? The reality is that talking about climate change probably isn’t going to be a catastrophe, no matter how awkward it might seem at the time—but not talking about climate change most definitely will.