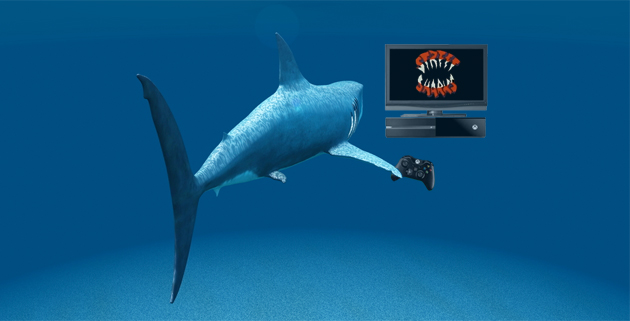 The Xbox One—Microsoft’s latest video game console and successor to the Xbox 360—goes on sale at midnight on November 22. It will face-off against Sony’s new PlayStation 4 in the holiday-season spending sprees. People love their video games, and global anticipation is sky-high for both consoles. Xbox celebrations across the globe will include zombies and Roman soldiers occupying Times Square, for instance. But the most interesting way Microsoft is exploiting the anticipation is through a publicity stunt that involves sharks.

At midnight on the appointed night, the world’s first official Xbox One will be handed to one lucky person in New Zealand. That console is currently on lockdown at Kelly Tarlton’s Sea Life Aquarium in Auckland, NZ—where it rests in a waterproof container in a tank filled with 20 sand tiger sharks.

For footage of aquarium personnel and Xbox guys setting this up, click here.

As a stunt, the idea makes sense. Sharks have a special place and reputation in popular culture as the ultimate aquatic killing machines in the natural world. But in real life, sharks rarely hurt people, and you are more likely to get maimed by your own toilet than by a scary shark. So how effective would these guardian sharks be if an Xbox enthusiast dove into the tank in an insane attempt to steal the coveted console?

“I wouldn’t recommend falling/diving into a shark exhibit, mainly because the sharks may get startled and injure themselves by swimming into walls.”

“You would have nothing to worry about if you fell into a tank of sand tiger sharks—they are rather docile,” explains Carl Meyer, shark expert and assistant researcher at the Hawaii Institute of Marine Biology. “Even with [much bigger] tiger sharks, the most likely case scenario is that they would startle and bolt to the other side of the tank.”

Many big aquariums have sand tiger sharks on display because, while they may look frightening given their teeth and being sharks and all, they are relatively easy to keep in captivity. Meyer doesn’t recommend jumping into a shark tank to retrieve anything, even Xboxes. But it’s not humans’ safety that he’s worried about.

“I wouldn’t recommend falling/diving into a shark exhibit, mainly because the sharks may get startled and injure themselves by swimming into walls,” he says. “The odds of being bitten by a shark (or 20 sharks) in an exhibit are incredibly low if you are just entering the water. You could up the odds of getting bitten by poking and harassing the shark(s) in question, but they will still try to get away from you.”

We can only hope that the non-shark security at Sea Life Aquarium is better prepared to protect the console if someone tries to pull off a heist.

The aquarium and the Xbox publicity team did not respond to Mother Jones‘ requests for comment about sharks and Xboxes.