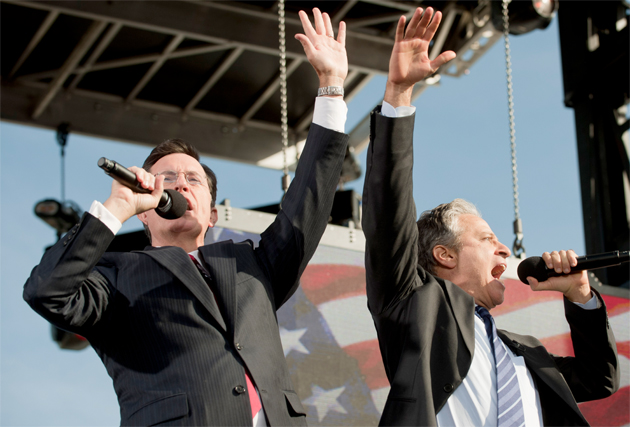 Ryan Zinke, a Republican running for Congress in Montana, is using a novel scheme to bankroll his congressional campaign—one that originated with Stephen Colbert.

In January 2012, Colbert summoned Daily Show host Jon Stewart and Trevor Potter, a campaign finance expert, to the Colbert Report studio for a surprise announcement: Colbert was handing control of his super-PAC—a political action committee that can raise and spend unlimited amounts of money on political races—to Stewart. The two comedians signed a two-page document, then held hands and locked eyes while Potter bellowed the words, “Colbert super-PAC transfer, activate!” Colbert then announced that he was forming an exploratory committee to weigh a run for “President of the United States of South Carolina.” Stewart, meanwhile, renamed Colbert’s super-PAC the Definitely Not Coordinating with Stephen Colbert Super PAC, and promised Colbert he would run ads to support Colbert’s presidential bid.

The point of Colbert and Stewart’s comedy bit was to demonstrate that the Supreme Court’s Citizens United decision had rendered campaign finance law remarkably flimsy—so weak that it was legal for a person to start a super-PAC, raise unlimited heaps of cash from big-money donors for that super-PAC, quit the super-PAC, and then run for federal office supported by that super-PAC. Here was an easy way to escape the $2,500 limit on what individuals may give to federal candidates.

Now Ryan Zinke—a 52-year-old ex-Navy SEAL and former state senator who is running to be Montana’s only congressman—is putting Colbert’s theory to the test. In 2012, Zinke founded Special Operations for America (SOFA) as a super-PAC backing Mitt Romney’s candidacy for president. The group, which Zinke founded out of anger that Obama was “taking credit” for the mission that killed Osama bin Laden, attracted national attention and raised more than $100,000 during the 2012 campaign. After Romney lost, the super-PAC kept raising money. Then, on September 30, Zinke quit the group he founded, handing control to former Navy SEAL Gary Stubblefield—his Jon Stewart. During that time, SOFA’s Facebook page and Twitter feed hummed with “draft Zinke” web ads for the Ryan Zinke Exploratory Committee. Three weeks later, on October 21, Zinke declared his candidacy—and SOFA announced that it would lend its fundraising muscle and substantial war chest to help its little-known former chairman get elected. “Show your support for Ryan Zinke by donating now!” a page on SOFA’s website proclaims.

“No one has really pushed the boundaries of super-PACs in this direction, to my knowledge,” says Paul S. Ryan, senior counsel for the Campaign Legal Center. (Rick Hasen, an election law expert at the University of California-Irvine, jokes in an email that the only precedent he can think of is Colbert’s “campaign.”) That doesn’t mean that what SOFA and Zinke are doing is illegal. The Federal Election Commission prohibits super-PACs from coordinating with candidates or their campaigns, but it defines “coordination” as specific conversations about advertising strategy. Founding a super-PAC, quitting the super-PAC, and running for Congress with the support of that super-PAC is not considered coordination.

Ryan says that in his reading of election law, SOFA is still subject to the $5,000 limit on what individuals can give to traditional PACs. This is because current law spells out donation limits for organizations that were once associated with a federal candidate. Practically, this means SOFA should be prepared to show the Federal Election Commission that it did not spend more than $5,000 from any given donor on advertising for Zinke. But Ryan notes the FEC hasn’t issued any rules saying whether this type of ban applies to super-PACs. SOFA would be the first super-PAC to test the issue.

SOFA is a formidable political ally for Zinke. In its most recent filings with the FEC, which cover a period ending June 30, the super-PAC reported $222,287 cash on hand—the rough equivalent of all the outside money spent on Montana’s congressional race in 2012. Filings also show that the end of the presidential election did nothing to slow SOFA’s fundraising—in fact, the group has raised more money since the end of presidential election than it did during the 2012 cycle, almost all of it from individual donors who gave less than $5,000. From January to June of this year, SOFA raised more than $400,000; of that, it spent only about $182,000.

SOFA’s website currently promises to support one other candidate—Tom Cotton, a House member from Arkansas who is running for senator. But the group’s Twitter and Facebook feeds are almost exclusively devoted to lauding Zinke.

Neither Zinke’s campaign nor Special Forces for America responded to repeated requests for comment.

Zinke, a Montana native, spent several years on SEAL Team 6 during the ’90s before serving intermittently in Iraq from 2004 to 2008. He served in the Montana state Senate for one term before becoming the running mate of 2010 Montana gubernatorial hopeful Neil Livingstone. But he only rose to national prominence in July 2012, when he founded SOFA and began to attract attention from cable news networks.

Zinke left the SEALs under unclear circumstances. “There were ethics issues around his travel. He was using government travel to visit his home in Montana,” a senior Defense Department official who had served as a Navy SEAL told BuzzFeed‘s Michael Hastings shortly after Zinke founded SOFA. “He got caught. That’s why he left the SEALs.” Zinke explained that the “incident with the travel claims” was actually the result of Zinke’s attempt to set up SEAL training in Montana. “I was very aggressive wanting to open up opportunities in Montana,” he told Hastings. “I’m sure I pissed people off along the way.”

For now, SOFA is busy campaigning for Zinke. Its Facebook posts have directed donors to give to his exploratory committee. Others counted down to his congressional announcement. Now that he’s officially running, SOFA is sharing links to his media appearances and directing followers to his website. Zinke, meanwhile, is busy spreading his message—which focuses on his support for the Second Amendment and for energy independence, and his belief that America is turning into Bosnia-Herzegovina or Iraq. “As a SEAL commander with 23 years, I’ve seen what happens when people no longer have faith in government,” he warned at his campaign launch. “It is the Middle East. It is Africa. Never in my lifetime would I ever think that our country would be compared to a third-world nation.” SOFA came out with a new fundraising plea the very next day. “Forward this email to all friends, family and anyone that seeks to preserve America’s Exceptionalism,” it read. “Donate to Special Operations for America to support candidates like Ryan Zinke.”