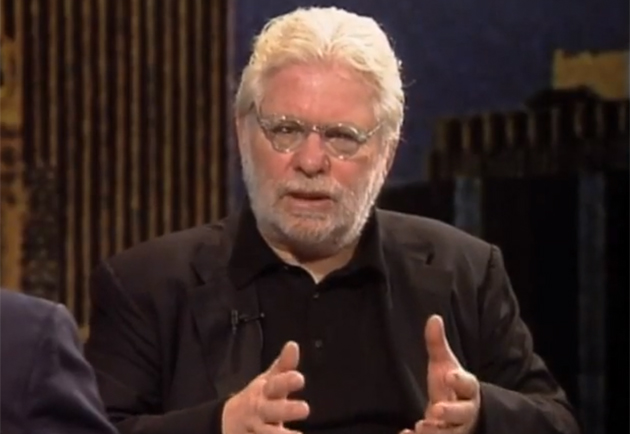 Washington Post columnist Richard Cohen has come under fire again for making a bizarre claim in a column. His latest gaffe is bad—but is it the worst thing he’s ever written? Let’s count down Cohen’s 10 worst moments from decades of column writing to see which one takes the crown.

Today’s GOP is not racist, as Harry Belafonte alleged about the tea party, but it is deeply troubled — about the expansion of government, about immigration, about secularism, about the mainstreaming of what used to be the avant-garde. People with conventional views must repress a gag reflex when considering the mayor-elect of New York — a white man married to a black woman and with two biracial children. (Should I mention that Bill de Blasio’s wife, Chirlane McCray, used to be a lesbian?) This family represents the cultural changes that have enveloped parts — but not all — of America. To cultural conservatives, this doesn’t look like their country at all.

In the middle of an otherwise innocuous column about Chris Christie and the Republican presidential race for 2016, Cohen inexplicably seizes the opportunity to offend most Americans. If you’re too busy cleaning vomit off your keyboard to finish the paragraph, he’s saying that “people with conventional views” can’t stomach the concept of interracial marriage. UPDATE: Cohen now claims that when he said “people with conventional views,” he was “talking about tea party extremism. And it’s clear.” Right.

1 (tied). Richard Cohen goes to the movies, finds out slavery is wrong.

I sometimes think I have spent years unlearning what I learned earlier in my life…slavery was not a benign institution in which mostly benevolent whites owned innocent and grateful blacks. Slavery was a lifetime’s condemnation to an often violent hell in which people were deprived of life, liberty and, too often, their own children.

About a week ago, Richard Cohen went to see 12 Years a Slave and came out surprised by the brutal depiction of slavery in America. He defended himself by saying that he learned slaves “were sort of content” and “slave owners were mostly nice people” in school. Cohen graduated high school in the class of ’58. No, 1958.

So now back to Miley Cyrus and her twerking. I run the risk of old-fogeyness for suggesting the girl’s a tasteless twit — especially that bit with the foam finger. (Look it up, if you must.) But let me also suggest that acts such as hers not only objectify women but debase them. They encourage a teenage culture that has set the women’s movement back on its heels.

Quick, who’s to blame in the Steubenville rape scandal? (Take your time.) If you answered “Miley Cyrus,” you’re probably Richard Cohen. In a September column, Cohen expressed horror at the inhumanity of the Steubenville case, then bravely called out the biggest culprit of all: Miley, who exploited sex and deprived it “of all intimacy.” He also calls her a “twerk” for some reason.

Thomas stands nearly alone on the court in his shallowness of his scholarship and the narrowness of his compassion. But when it comes to his alleged sexual boorishness, he stands condemned of being a man.

In a 2010 column, Cohen dismissed any allegations of sexual misconduct that occurred during the 1980s, since that was “a bit before the modern era,” and argued that Thomas’ alleged actions—including asking a woman at work for her bra size and making other sexual comments—were just typical guy stuff. Cohen claimed that Anita Hill couldn’t have been harassed, because “why did she follow her abuser, Thomas, from one job to the next?” But maybe that’s unfair to Cohen. After all, it’s not like he was ever accused of sexual harassment in the workplace.

1 (tied). Richard Cohen is accused of sexual harassment in the workplace.

Stand up and turn around.

According to a Washington Post staffer, Cohen said the above to 23-year-old editorial aide Devon Spurgeon. Staffers said he also told her she “looks good in black” and engaged her in an offensive discussion about oral sex following the Monica Lewinsky scandal. (Cohen denies the first comment and says the others were made innocently.) Spurgeon took a leave of absence, and Washington Post management found that Cohen committed “inappropriate behavior,” but Cohen maintained, “it was a personality dispute [that] had nothing to do with sexual harassment as the term applies today.” For further reading, see Cohen’s creepy screed on how terrible it is that women in movies don’t fall for men decades their elder as much as they used to.

I don’t like what George Zimmerman did, and I hate that Trayvon Martin is dead. But I also can understand why Zimmerman was suspicious and why he thought Martin was wearing a uniform we all recognize…The result was a quintessentially American tragedy — the death of a young man understandably suspected because he was black and tragically dead for the same reason.

In July, Cohen took on Trayvon Martin’s death with his usual gravitas. He lamented that no politicians will “acknowledge the widespread fear of crime committed by young black males” and compared protesting stop and frisk laws to racism itself. “If I were a young black male and were stopped just on account of my appearance, I would feel violated,” he conceded.

1 (tied). Richard Cohen has never not been afraid of young black men.

As for me, I’m with the store owners.

In 1986, Cohen wrote a column defending New York City jewelry store owners who refused to let young black men into their establishments for fear of crime. Post executive editor Ben Bradlee had to apologize for running the piece after readers protested, though Cohen was unperturbed enough to write the same thing in his Trayvon Martin column decades later. Presumably his opinion won’t change until he sees a good movie about racial profiling in 150 years or so.

There is no doubt that Polanski did what he did, which is have sex with a 13-year-old after plying her with booze. There is no doubt also that after all these years there is something stale about the case, not to mention a “victim,” Samantha Geimer, who has long ago forgiven her assailant and dearly wishes the whole thing would go away. So do I.

In this 2010 column, Cohen thanked Switzerland for refusing to extradite Roman Polanski and “salute[s] his genius.” He also put scare quotes around “victim,” as if to express doubt that a 13-year-old girl who was drugged and raped multiple times could be anything but.

1 (tied). Richard Cohen takes a stand against torture, which he says totally works.

But it is important to understand that abolishing torture will not make us safer. Terrorists do not give a damn about our morality, our moral authority or what one columnist called “our moral compass.” George Bush was certainly disliked in much of the world, but the Sept. 11 attacks were planned while Bill Clinton was in office, and he offended no one with the possible exception of the Christian right. Indeed, he went around the world apologizing for America’s misdeeds — slavery, in particular. No terrorist turned back as a result.

Although torture is morally repugnant, Cohen argued in this 2009 column, it definitely helps catch terrorists. “Of course it works,” he wrote, before arguing against it. (He also noted that terrorists don’t care if we apologize for slavery. Maybe they won’t understand until they’ve seen 12 Years a Slave.) A few weeks later, Cohen wrote that he “[has] to wonder” whether or not torture works, meaning he either changed his mind or completely forgot about his previous column.

…For his eloquent columns on social and political issues.