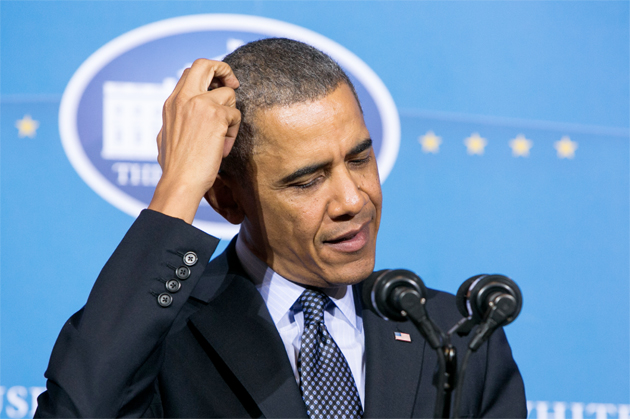 On Thursday morning, President Barack Obama announced a fix for the millions of Americans whose insurance plans are being canceled that will allow them to keep their plans for an extra year. But the president’s proposal did not go far enough for many congressional Democrats, who are increasingly worried Obamacare’s mounting problems are harming the party as a whole.

Last week, Sen. Mary Landrieu (D-La.), who is up for reelection in 2014, introduced a bill that would allow Americans with plans that are noncompliant with the Affordable Care Act to keep those plans indefinitely; since then, five other Senate Dems have joined as cosponsors. One of them, Sen. Kay Hagan (D-N.C.), told reporters Thursday that Obama’s plan is a “good intermediate fix, but we still need the Landrieu bill.”

Several senators said that Obama’s fix was merely “a step in the right direction.”

The Democratic M.O. is no longer “‘hang in there, things will settle out,'” says Lawrence Jacobs, a political science professor at the University of Minnesota and author of Health Care Reform and American Politics. “It’s: ‘Things are bumpy, how are we going to get through an election year?'” Landrieu and Hagan, as well as two other cosponsors on the Landrieu bill—Mark Pryor (D-Ark.) and Jeff Merkley (D-Ore.)—are up for reelection next year.

Obama’s plan, as well as Landrieu’s and Udall’s bills, are political fixes, not policy fixes. Allowing Americans to keep plans that would have been canceled will cause premiums to rise on the exchanges because healthy, young people will be motivated to stay out of the insurance marketplaces. The purported solutions to the cancellation problem would also rob millions of Americans of the added health benefits that Obamacare required plans in the individual market to cover, including hospitalization, maternity care, and mental health services. It “would fundamentally undermine the promise of the Affordable Care Act,” says Tim Jost, a health care scholar and Washington and Lee University School of Law.

“I understand people’s need to take action,” adds Ethan Rome, executive director of the nonprofit Healthcare for America Now, a group that backs the Affordable Care Act. “But this is not the action to take.”

It is still unclear whether Senate Majority Leader Harry Reid (D-Nev.) will bring Landrieu’s or Udall’s bills to the floor for a vote. The growing anger in his caucus may force his hand. But since supporters of the legislative fixes are mostly Dems who are up for reelection, the idea that the bulk of Senate Democrats are demanding more dramatic measures on the cancellation issue is “likely nonsense,” one Democratic aide tells Mother Jones. If Reid believes that Landrieu and Udall just have the pre-election jitters, he could use his powers as majority leader to try to delay or block a vote on their bills entirely.

The Republican-controlled House, meanwhile, is moving forward with its own Obamacare proposals. Rep. Frank Upton (R-Mich.) has introduced legislation in the House that is similar to the Senate bills; it will get a vote on the House floor on Friday. With Senate Dems coming out in favor of keep-your-plan bills, House Dems may be more inclined to support the Upton bill.

Dems are moving toward tweaking the health care law in other ways, too. Sen. Joe Manchin (D-W. Va.) has proposed delaying the individual mandate for a year, and Udall and New Hampshire Sen. Jeanne Shaheen, another Democrat who faces reelection next year, have called for an extension of the enrollment period. Last week, nine Democrats in the House introduced a bill that would delay penalties for people who don’t purchase health insurance until HealthCare.gov is fully operational.

Democrats’ newfound willingness to alter Obamacare could eventually spell a total win for Republicans, Jacobs says: “It could…provide a toe hold for the ultimate goal of Republicans, which is to block reform all together and kill [Obamacare] in the carriage.”