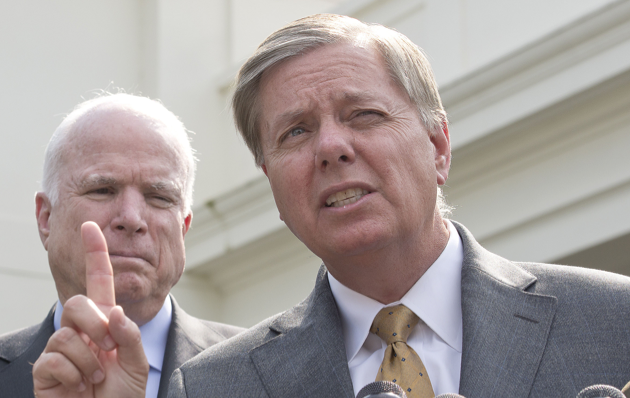 Today, Senator Lindsey Graham (R-S.C.) introduced a bill that would ban all abortions after 20 weeks of pregnancy. The legislation, titled the “Pain-Capable Unborn Child Protection Act,” is a close companion to the bill that the House passed this June.

Political observers see the bill as a sop to conservative voters in South Carolina, where Graham faces uncertain reelection prospects. A recent poll shows that the two-term incumbent leads his Republican primary challengers with 51 percent of the vote. The bill he has introduced is predicated on the popular anti-abortion argument—which has no medical basis—that a 20-week-old fetus can feel pain.

Under Roe v. Wade, abortion is legal until the 24th week of pregnancy. The text of Graham’s bill is not yet available, but it is likely to include an exception for victims of rape or incest. In an interview on Sunday with Fox’s Chris Wallace, Graham said his intention was to “protect a child that can feel pain from an abortion unless there’s the life of the mother, rape or incest involved.”

The House bill did not initially include a rape or incest exception. In defending this omission, Rep. Trent Franks (R-Ariz.), the bill’s primary sponsor, argued that “the incidence of rape resulting in pregnancy are very low”—an echo of former Rep. Todd Akin’s remark that “legitimate rape” does not result in pregnancy. Franks’ remarks sparked enough furor that House Republicans quietly added a rape or incest exception to the bill before passing it.

The bill, notes National Review Online, does not have uniform support among Senate Republicans. Senator Mike Lee (R-Utah), worries that Congress does not have the authority to pass this bill under the Commerce Clause, and that the bill as written would be congressional overrreach.

In July, Harry Reid, who is pro-life, said he’d be “happy” to consider putting a 20-week abortion ban to a vote in the Senate but that the Senate shouldn’t focus on “fringe issues.” Political handicappers note that the Senate does not have the votes to pass Graham’s bill.