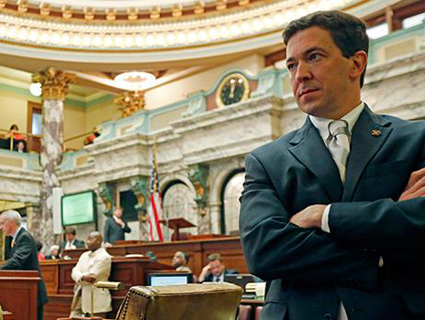 In October, I reported that Mississippi GOP senate candidate Chris McDaniel had delivered speeches to the local chapter of the Sons of Confederate Veterans, including during a conference the neo-Confederate group held in August. When I contacted McDaniel’s campaign for the story, a spokesman said: “Senator McDaniel has driven across Mississippi to speak to many groups over the past decade.” He did not dispute that McDaniel had attended the August gathering. A spokesman for the SCV chapter also told me that McDaniel had attended the August event as well as an earlier event, but now McDaniel is saying he wasn’t at the August gathering. He told the Clarion-Ledger that although he had been scheduled to speak at the event, but missed it because he was in Chicago for a conference for the American Legislative Exchange Council (ALEC). An SCV member backed him up:

“He wasn’t at this last one,” said [SCV spokesman George Jaynes]. “He missed a flight coming out of Chicago … A guy from Mother Jones news, which I had never heard of, called me the other night and was asking questions. Maybe I didn’t explain myself well. Maybe this guy misunderstood me. But (McDaniel) wasn’t there.”

The Southern Heritage Conference was Aug. 9-10. The ALEC conference in Chicago was Aug. 7-9. McDaniel said he recollects he stayed over at least a day after the ALEC event, and was still out of state when the Rosin Heels event was held.

McDaniel also alleges that Mother Jones “doctored” a photo to falsely depict him speaking to the event; the image was identified in the story as a photoshop.

Though McDaniel might have missed the conference because of airline issues, he did deliver the keynote address at an event the group held on June 22 in Jackson. Jaynes confirmed to the Clarion-Ledger that McDaniel had indeed spoken to the group in previous years (which Jaynes also told me). So whether or not McDaniel made it to the August conference, there is no question he’s been a friend to this particular group.