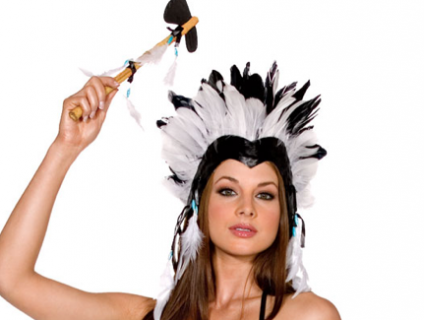 Tomorrow night, Americans will glue on feathers, douse their faces in fake blood, and scramble to CVS for last-minute costumes to celebrate Halloween. Some costumes will be outrageously creative. Some will be lame. Many will be wildly offensive.

Last weekend brought some egregious examples—a “22-year-old Cape Coral bro” snapped a photo of himself dressed as George Zimmerman, while his 25-year-old friend went in blackface as Trayvon Martin. The official Twitter account for the Utah Jazz basketball team tweeted out a photo of a man dressed as a player, also in blackface. And actress Julianne Hough issued an apology after dressing like her favorite Orange Is the New Black character—in blackface.

But these aren’t the only examples. Right now, Halloween stores are packed with costumes like “Tribal Tease” and “Hey Amigo Mexican,” which make light of centuries of genocide, hatred, and discrimination and advance offensive stereotypes. Though the politics of Halloween costumes aren’t always obvious—see this debate about whether an advice seeker’s roommate is “Japanese” enough to dress as a geisha—The Root points out that there’s never an excuse for choosing an ethnically inspired Halloween costume (or dressing up as Hitler or a Nazi). So without further ado, here’s a helpful guide to help you figure out whether your Halloween costume is racist, sexist, fascist, or xenophobic. And if it is, take it off.