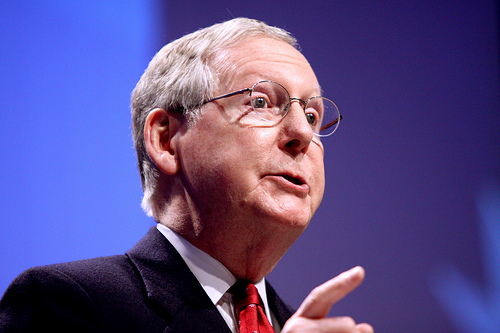 In an interview on Thursday morning with the National Review‘s Robert Costa, Senate Minority Leader Mitch McConnell (R-Ky.) made an intriguing comment that caught our eye. Fresh from helping to broker the deal to end the government shutdown and lift the debt ceiling, McConnell was asked by Costa if political factors in Kentucky were shaping his legislative strategy in Washington. As we’ve reported, McConnell faces a tough reelection fight, including a fierce primary challenge, with Kentucky tea partiers steaming over McConnell’s deal-making on issues like the 2012 fiscal cliff deal, Syria, and now the debt ceiling.

COSTA: A lot of reporters think your decisions are driven by political considerations in your home state, especially your primary versus Matt Bevin and a potential general-election campaign versus Democrat Alison Lundergan Grimes. How are those factors shaping your strategy?

MCCONNELL: Oh, that’s the Mother Jones thesis. I have nothing to say about my primary opponent. And this week, it’s pretty obvious about whether that’s driving my decisions. As for [Lundergan Grimes], the whole rationale for her candidacy is that I’m part of the dysfunction in Washington, so she’s probably been pretty unhappy over the past 24 hours. I’ve demonstrated, once again, that when the Congress is in gridlock and the country is at risk, I’m the guy who steps forward and tries to get us out of the ditch. So it’s been a bad 24 hours for her, and she’s going to need to find a new rationale.

We’re flattered to know that McConnell, arguably the most influential Republican official in Washington, reads Mother Jones. We assume he’s referring to a September 19 story by David Corn which examined whether McConnell’s tea-party challenger, Matt Bevin, was preventing the minority leader from fully engaging in the shutdown negotiations. “McConnell must fear the wrath of [Kentucky Senator Rand] Paul and the Paulites, should he engage in wheeling and dealing that results in any accords that offend the sensibilities of the tea partiers,” Corn wrote. “Caught between Rand Paul and the White House, one of the most powerful and sly politicians in Washington has little room to work his behind-closed-doors magic.”

For what it’s worth, we’d also direct McConnell to our reporting on other aspects of his reelection fight, including the race’s hefty price tag, the fundraising dream team assembled by Lundergan Grimes, McConnell’s tea party challenger, and grassroots conservatives’ dim view of McConnell and their eagerness to oust him.