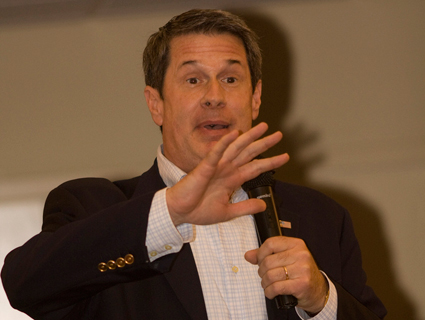 Update: Heritage Action, the political action arm of the right’s top think tank and a leader in the anti-Obamacare crusade, is urging members to vote against House Speaker John Boehner’s latest proposal to end the shutdown and debt ceiling crisis. After the tea partyish organization declared its opposition, the House Rules Committee postponed a Tuesday night hearing on the bill, an indication Boehner’s plan might be dead even before arrival within his own caucus. So…buy gold.

On Tuesday afternoon Speaker of the House John Boehner (R-Ohio) unveiled his final offer to end the shutdown and stave off a catastrophic federal default. The GOP’s proposal would fund the federal government through December 15 (setting up a possible Christmas shutdown; hooray!), raise the debt ceiling through February 7, and incorporate what’s known as the “Vitter amendment”—language prohibiting congressional staffers from receiving subsidies for the purchase of health insurance. It would also prohibit the Secretary of the Treasury from taking “extraordinary measures” to prevent the default—which some Republicans have previously suggested might help stave off the crisis—due to fears among GOP congressmen that Secretary Jack Lew was using his powers to fudge the deadline.

Not included in the bill are several provisions that had been discussed previously, such as a “conscience clause” to exempt employers from having to include birth control as part of their insurance plans, and a delay of repeal of the Affordable Care Act’s tax on medical device manufacturers—a proposal supported by donors but rejected by some conservative members. Boehner is set to bring the bill to a vote Tuesday night, leaving it up to the Senate, where Democrats have previously opposed all efforts to include the Vitter amendment in impasse-ending legislation. Some House Republicans had considered ditching town after the vote, in the hopes of forcing the point.

We’ll keep you updated. In the meantime, you can read the bill: