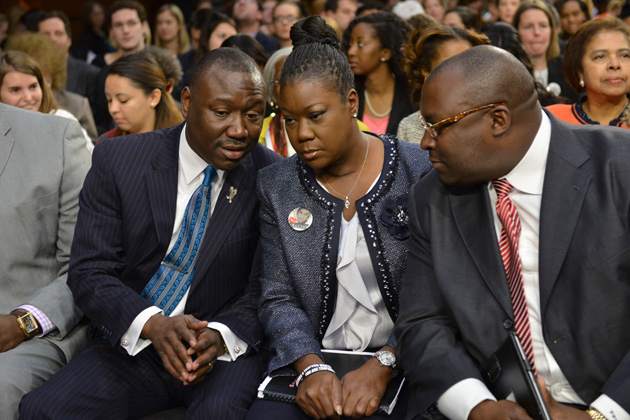 When it was his turn to ask a question at Tuesday’s Senate hearing on Stand Your Ground laws, Sen. Ted Cruz (R-Texas) lowered his voice and spoke cautiously about the pain Sybrina Fulton, the mother of Florida teenager Trayvon Martin, must feel. But then he got to his point. Addressing Fulton, who had traveled from Florida to express her opposition to the spread of these laws, Cruz sought to downplay the significance of her message.

“I understand, for the family, you’re simply mourning the loss of your son, and I understand that,” he said, “but there are other players that are seeking to do a great deal more based on what happened that Florida night.”

Cruz, his Republican colleagues, and the witnesses they’d summoned before the Subcommittee on the Constitution, Civil Rights and Human Rights, had a different point to make: Stand Your Ground laws—which allow a person to kill another if he feels his life is endangered—benefit black people if you hold the data up to the light and squint a little. And those who would say otherwise are using race as a cudgel to force through their anti-gun agenda. “With whom do we stand?” Cruz asked. “I for one believe we should stand for the innocent against aggressors.”

Cruz, who threatened a filibuster to block gun control legislation in the Senate last spring, argued that Stand Your Ground laws actually help black people, because black defendants are more likely to have a killing ruled justifiable by a jury. (Black defendants who cited SYG were successful 55 percent of the time, according to Cruz’s statistics; white defendants who made the same claim were successful in 53 percent of the cases.) Fulton and Lucia McBath, another witness whose son, Jordan Davis, was shot by a man who is expected to claim the Stand Your Ground defense, had plenty of evidence to the contrary, but Cruz and his allies talked right past them.

John Lott, a pro-gun researcher who has chided President Barack Obama in the pages of National Review for failing to speak out against black-on-white violence, offered more data to support Cruz’s theory that blacks gain from SYG laws. “If you’re going to concentrate on the fact that relatively few people who kill blacks are going to be convicted, you have to realize that most of those people who aren’t being convicted are blacks,” he said. “Ninety percent of blacks who were killed in cases where Stand Your Ground was invoked as a defense were killed by other blacks.” Lott was suggesting that the limited data available could be read to suggest that African Americans were benefiting from SYG laws.

Rep. Louie Gohmert (R-Texas), who was appearing as a witness, started off his prepared remarks by informing the room that he had once defended a black man who was being tried for murdering “an unarmed naked man.” But he didn’t present any statistics to back up Cruz’s argument.

Democratic lawmakers and witnesses, however, cited studies from Texas A&M University and the National Urban League that highlighted the stark racial disparities in Stand Your Ground laws and picked up on what Cruz missed: The greatest determining factor in whether your SYG claim will hold up is the race of the victim. According to a study commissioned by the National Urban League, homicides were “justifiable” in 49 percent of cases in which a white man shot a black man compared to just 8 percent of cases in which the roles were reversed. Other studies have found similar results. Here’s a chart that John Roman, a senior fellow at the Urban Institute, created using data from the Federal Bureau of Investigation: 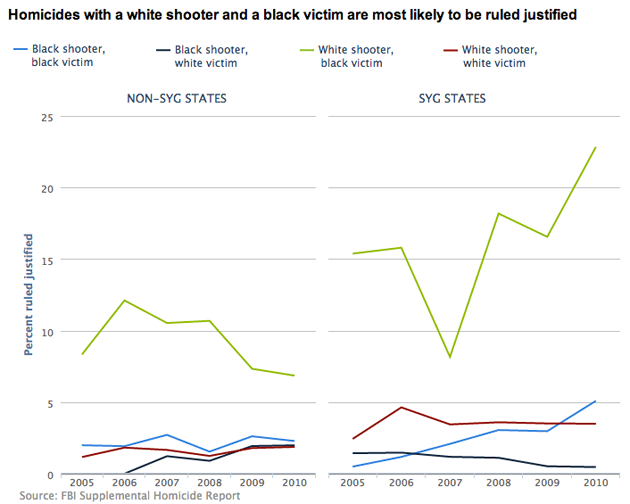 Tuesday’s hearing was originally supposed to be held on September 17, but was postponed because of the mass shooting at Washington Navy Yard. A hearing on gun laws, bumped because of a mass-murderer with a gun. That’s not a metaphor, just a thing that happened.