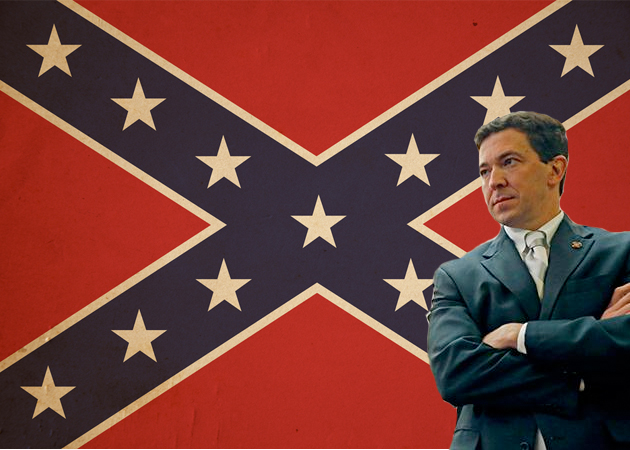 Update: Chris McDaniel is now saying he wasn’t at the event in August. See our update here.

Chris McDaniel is taking the “GOP Civil War” to a new level. Two months ago, the tea party-backed Mississippi Senate candidate addressed a neo-Confederate conference and costume ball hosted by a group that promotes the work of present-day secessionists and contends the wrong side won the “war of southern independence.” Other speakers at the event included a historian who believes Lincoln was a Marxist and Ryan Walters, a PhD candidate who worked on McDaniel’s first political campaign and wrote recently that the “controversy” over President Barack Obama’s birth certificate “hasn’t really been solved.”

McDaniel, a state senator, is challenging incumbent Republican Sen. Thad Cochran in next summer’s GOP Senate primary. After announcing his run last week, McDaniel quickly picked up endorsements from the Club for Growth and the Senate Conservatives Fund, a political action committee founded by former Sen. Jim DeMint (R-S.C.), a prominent backer of the tea party. Both groups are key players in the internal GOP battle between establishment-minded Republicans and tea party insurgents and are backing right-wing challenges to incumbent Republicans whom they deem insufficiently conservative. Cochran, who is finishing out his 35th year in the Senate and has not said if he will seek re-election, earned the ire of tea partiers by voting to re-open the federal government and avert defaulting on the debt. McDaniel, whose campaign bus features an image of Article I of the Constitution, has promised to make Cochran’s debt ceiling vote a centerpiece of his campaign.

With their endorsements of McDaniel, the Senate Conservatives Fund and the Club for Growth have shown just how far they are willing to go in terms of embracing the far right to prosecute their war for the soul of the party. In August, McDaniel addressed a neo-Confederate conference in Laurel, Miss., near his hometown of Ellisville. A local chapter of the Sons of Confederate Veterans (SCV), the Jones County Rosin Heels, hosted the two-day event, which the group described in invitations as a “Southern Heritage Conference” for “politically incorrect folks.” Attendees were advised to dress in “Confederate uniforms and antebellum ball gowns or wee kilties.” McDaniel’s appearance at the Rosin Heels heritage conference was not a one-off occurrence; weeks earlier he was the keynote speaker at a separate event in Jackson.

The Rosin Heels does more than regret the outcome of the Civil War. Its monthly newsletter routinely features articles and essays advocating for present-day secession. Its August newsletter highlighted the seven-year-old “Burlington Declaration” from the First North American Secession Convention, which stated that the right of secession was a “[truth] of natural law and the human experience.” (While it did not advcoate for specific secession movement, the proclamation affirmed the right of the conference’s various attendees to do so.) In September, the newsletter included an essay on secession from the League of the South, lamenting the loss of southern independence at the hands of the “plutocracy and proletariat of the world.” A note from the editor stated that “we are living in the times that Jefferson Davis predicted would one day come,” in which the conflicts that presaged the Civil War would flare up again. The June issue compared Obama’s policies to the ravages of Reconstruction: “Our people have had to put up with for the last FIFTEEN DECADES!!!”

McDaniel is “just proud of his heritage and grateful for it, and that’s the reason we wanted him to come in and speak a couple of times,” says George Jaynes, a member of the Rosin Heels and the newsletter’s editor, who confirmed that McDaniel had attended the events. “We’re mainly here to remember the Confederate soldier, our Confederates beliefs, our culture, our civilization. We’re here to remember their good names upheld them to tell the truth and to give the facts of the war whether it falls on our side or the other. We’re here to tell the truth—that’s what the SCV’s about and that’s the kind of speaker we bring in.”

The group also purchases billboards, with messages such as “Happy birthday, President Jefferson Davis,” and “Fort Sumter was fired on when Lincoln tried to reinforce his customs house for tax collection.”

McDaniel was joined at the Southern Heritage Conference by Al Benson, a historian from Louisiana, who talked about his book Red Republicans & Lincoln Marxists, which speculates that Lincoln’s actions during the Civil War were influenced by the writings of Karl Marx. (“Was Abraham Lincoln influenced by communism when the Union condemned the rights of Southern states to express their independence? It’s shocking to think so.”) Benson’s Amazon bio describes him as “a true Copperhead,” a reference to Northern Democrats who supported the Confederate cause. In the September issue of the Rosin Heels newsletter, Benson writes that the nation’s public school system was a product of “spiritual apostasy” by Unitarians and socialists.

The third speaker at the event was Ryan Walters, a PhD student at the University of Southern Mississippi who occasionally guest-hosts “The Right Side,” the radio program McDaniel hosted before he entered politics (and still regularly appears on). Walters worked for McDaniel’s first political campaign and previously suggested that President Obama was preparing to send army tanks to Texas. “As you recall, there was great controversy over Obama’s birth certificate, which hasn’t really been solved, but that’s another story,” he wrote in a recent blog post.

“Senator McDaniel has driven across Mississippi to speak to many groups over the past decade,” campaign spokesman Keith Plunkett wrote in an email to Mother Jones. “He will speak to groups whether they are idealogically [sic] on the left or the right and anywhere in between, because he believes the message of individual freedom that comes from following the Constitution is something that benefits every American.”

Hobnobbing with birthers and Lost Causers may not be an impediment for McDaniel as he tries to dethrone Cochran—he is, after all, in Mississippi. According a 2011 survey from Public Policy Polling, only 47 percent of Mississippians—and 21 percent of Mississippi Republicans—were satisfied with the outcome of the Civil War.