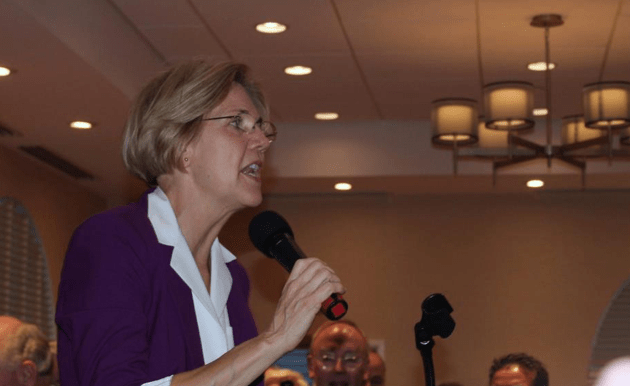 This past weekend, the Department of Justice slapped a record fine on JPMorgan Chase for packaging and selling the mortgage-backed financial products that helped cause the financial meltdown. But Sen. Elizabeth Warren (D-Mass.) wants the administration to know that fines are not enough. On Wednesday, she called on Wall Street regulators to hold all those responsible for the 2008 crisis accountable.

In a letter to the Federal Reserve, the Securities and Exchange Commission (SEC) and the Officer of the Comptroller of the Currency (OCC), Warren lauded the overseer of the TARP bailout program for cracking down on financial industry players who wasted, stole, or abused the federal emergency funds doled out to banks during the financial crisis, and implied that the three banking regulators should also punish individuals who helped cause the financial meltdown.

Although the budget for TARP’s inspector general was “a small fraction of the size of the budgets and staffs at your agencies,” Warren pointed out, the program’s watchdog has brought criminal charges against nearly 100 senior executives; obtained criminal convictions on 107 defendants, including 51 jail sentences; and suspended or banned 37 people from working in the banking industry.

How about you guys, Warren asked. She called on the Fed, the SEC, and the OCC to provide records on the number of people the agencies have charged criminally and civilly, the number of convictions and prison sentences they have obtained, the number of people banned or suspended from working in the industry, and the total amount of fines leveled against Wall Street ne’er-do-wells.

Warren knows the answer to most of these questions, but wants to shame the agencies into action. Yes, big banks have been forking over billions of dollars in civil settlements for bad behavior in the lead up to the crisis. There have been prosecutions of various smaller mortgage brokers, and some civil charges and settlements against executives who helped cause the crisis. But zero Wall Street CEOs are in jail for bringing down the economy, and no CEOs have faced criminal charges.

Earlier this year, U.S. Attorney General Eric Holder seemed to concede that some banks are “too big to jail.” But Warren doesn’t buy it. “There have been some landmark settlements in recent weeks for which your agencies and others deserve substantial credit,” Warren said in the letter. “However, a great deal of work remains to be done to hold institutions and individuals accountable for breaking the rules and to protect consumers and taxpayers from future violations.”