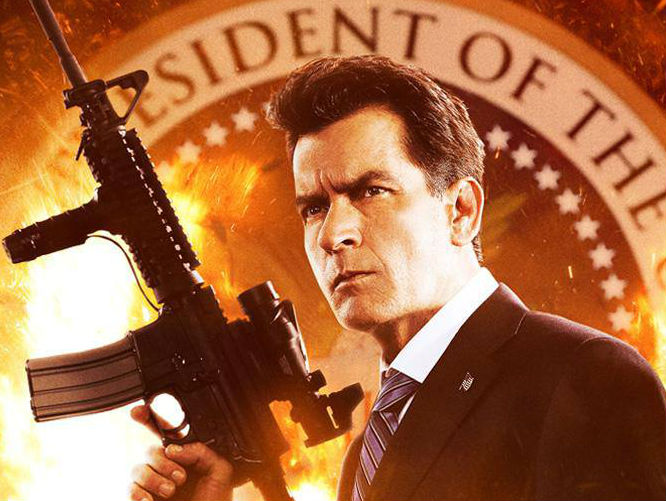 “Motherfucker, I’m not asking! I’m the president of the fucking United States, man.”

So says President Rathcock (solidly played by Charlie Sheen) to Machete (Danny Trejo) during their first encounter in Machete Kills. Rathcock orders the ex-federale to assassinate a psychotic Mexican revolutionary named Mendez (Demián Bichir), who has a missile pointed at Washington, DC. In exchange, the president gives Machete full and immediate citizenship. “I just stamp this bad motherfucker,” Rathcock says, as he marks Machete’s papers.

Machete Kills, directed and co-written by Robert Rodriguez, is the sequel to 2010’s Machete. While it is only marginally political—immigration, the drug war, the military-industrial complex—the first film is one long love letter to liberal immigration politics. (For the record, Rodriguez donated quite a lot of money to Democrats and Obama’s reelection effort). In 2010, some noisy conservatives accused Rodriguez of creating an incitement to race war; and after Arizona’s SB 1070 became law, Rodriguez and Trejo cut a trailer in which Machete delivers a “special Cinco de Mayo message—to Arizona”:

Machete Kills marks the introduction into the franchise of several new characters, such as Luther Voz (a billionaire villain modeled in part after Tesla Motors CEO Elon Musk, and played by Mel Gibson) and Rathcock. Here’s footage of Sheen talking about what he would do if he were President of the United States in real life; his agenda would include banning Twitter and establishing “nude Tuesdays”:

As you may recall, Sheen’s dad, Martin, is famous for playing another fictional American president: Jed Bartlet, on Aaron Sorkin‘s NBC drama The West Wing. “I am the more interesting president, yeah,” Charlie told the US edition of Metro. “I will have your vote after [you see] the movie…In one day in the Oval Office, I slept with three women, pulled out a machine gun, drank, smoked and swore. In seven [seasons], dad didn’t do any of that, you know?”

It is true that Rathcock is much more of an assault-rifle-wielding, playboy hedonist than Bartlet ever was. But which one is the superior American president? Here’s a cheat sheet on their politics and personalities for you to decide which you’d rather vote for:

So, which one of them has your vote?