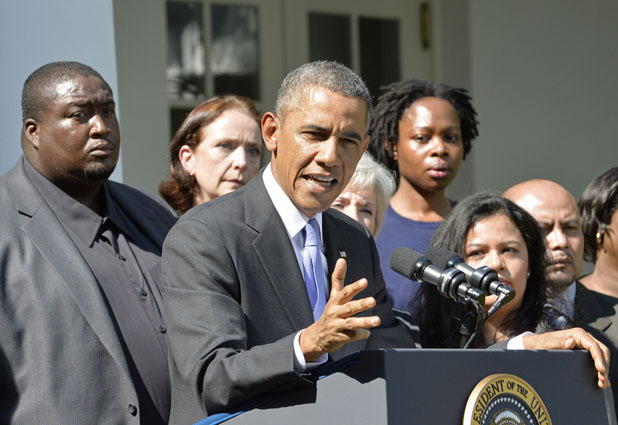 At the start of this shutdown-struck week, I published a piece asking whether Barack Obama should “reveal his inner pissed-off president.” The point was to wonder if it were time for the president, who usually keeps his cool, to call out the tea party Republican hostage takers as crazies hell-bent on imposing suffering on millions of Americans—by shuttering the federal government and/or forcing a US government default—due to their obsessive opposition to Obamcare. It’s unclear whether there’s anything the president could say that would change the perverse internal dynamic within the House Speaker John Boehner’s GOP clown show, but perhaps—call it an outside possibility—a more forceful and direct rhetorical shot from the White House could have some impact on the national conversation.

On Tuesday, Obama appeared in the Rose Garden and did angrily denounce the extremist Republicans for causing the shutdown and threatening to turn the coming debt ceiling tussle into another crisis. “That’s not how adults operate,” he declared, ratcheting up the tough talk. But the question remains: Is Obama’s language sufficiently descriptive for the situation at hand?

On Wednesday evening, Obama met with congressional leaders at the White House. The 90-minute confab was, as expected, unproductive. Afterward, Boehner told reporters, “All we are asking here is…fairness for the American people.” Fairness? That’s been the call of the Republican crusaders in recent days. They have been unwilling to fund the government at the reduced levels they demanded (via the debt ceiling negotiations of 2011 that yielded the automatic budget cuts known as sequestration) because they are trying to ensure “fairness” on Obamacare.

But this supposed campaign for fairness has resulted in the following shutdown effects:

There’s plenty more. National parks are closed. Food safety inspections have been curtailed. The Centers for Disease Control and Prevention will be halting its flu program—just as the flu season is arriving. Of course, hundreds of thousands of American families will have to go without paychecks because a breadwinner employed by the federal government has been furloughed. This shutdown will cause much hardship—possibly even disease and death. (These crusading Republicans are showing no regard for the fetuses that would benefit from the federal program that helps millions of low-income pregnant woman obtain healthy food.)

A simple question, then: Where’s the fairness in this?

Once upon time, Americans lived in a political-media environment in which a moment of eloquence and drama could change the course of events. In 1954, when Pentagon lawyer Joseph Welch, at a televised hearing, asked red-baiting Sen. Joe McCarthy, “Have you no sense of decency, sir?” it was as if a switch had been flipped. The exchange did much to sink the commie chaser’s career.

It’s doubtful that Obama or anyone else could pull off such an act today—especially given our cacophonous and cluttered media environment, in which so much information is delivered via filters designed to reinforce not change views. But imagine this scenario: The president meets with congressional leader, allows television cameras into the room for a brief press opportunity, and then on live television says, “John, can you explain to Americans why you and your fellow House Republicans think it is fair to shut down suicide prevention programs for our vets just because you don’t like a health care law that was passed by Congress and approved by the conservative-led Supreme Court? Is this the decent thing to do?”

Of course, Rush Limbaugh would accuse the imposter-in-chief of sandbagging a dedicated public servant. But is there a way for Obama to disrupt the narrative that the shutdown is the product of Washington dysfunction and to position Boehner as a renegade outlier who is more extortionist and fabulist than legislator? That might be a task beyond anyone, even a president. But so far Obama, who has stuck to his will-not-negotiate-with-hostage-takers stance, has been playing by the rules of acceptable political discourse. Perhaps he needs to bend them. If only in an attempt to show that certain words, such as “fairness,” still have meaning.