Friday morning in Stockholm, the the United Nation’s Intergovernmental Panel on Climate Change released a key section of its Fifth Assessment Report on global warming, which found that climate change is “unequivocal,” that humans are “extremely likely” to be the cause, and that the recent slowdown in the rate that surface temperatures are rising doesn’t contradict any of this. (Read a summary of the report or our live blog from Sweden.) 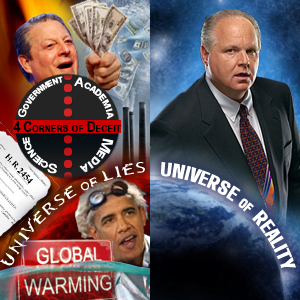 Rush Limbaugh would beg to differ. On his show on Friday, Limbaugh launched into a sprawling, 15-minute tirade against the IPCC, Al Gore, and affirmative action—all at the same time. Limbaugh argued that climate scientists and activists are perpetuating the global warming “hoax” because “the longer this goes, the richer they get.” At one point, Limbaugh likened this to Al Sharpton and Jesse Jackson, who, he said, “would be out of business” if racism ended in the United States. (Full transcript here.)

If I’m in a global warming movement, and it hasn’t warmed up in the last 15 years, I’d claim credit for it. I say it’s all the hybrids. It’s the reduction in coal! I claim that everything I’ve been advocating is the reason, and then I’d say,”We need to do more of this.” I mean, if their objective is to downsize this country and downsize our lifestyle and downsize our progress, we had a golden opportunity.

Fifteen years of no warming! They could have claimed credit and probably had a pretty good chance of being supported by the media in advocating further lifestyle change. But they didn’t, did they? Because they don’t want the issue changing in any way.  They don’t want the premise changed. The premise is it’s getting warmer and we’re causing it, and nothing is gonna change that narrative. Nothing.  Even if they can claim success in it.

The narrative, the template is, “It’s getting warmer, we’re causing it, we have to pay a price,” and it’s never gonna end. Just like affirmative action will never end. There will never be a day where somebody says, “You know what?  Okay, we’ve had enough reverse racism now that we’ve evened the score, and we’re gonna get rid of it and we’re now in a level playing field.” They (sic) will never happen.  The price will never be paid.

Limbaugh wasn’t the only one railing against the IPCC’s climate change report, of course. Rassmusen Reports ran a commentary by conservative pundit Michael Barone that compared global warming believers to a religious sect run amok:

Some religions persecute heretics. Some global warming alarmists identify “denialists” and liken them to Holocaust deniers.

Global warming alarmism even has indulgences like the ones Martin Luther protested. You can buy carbon offsets to gain forgiveness for travel on carbon-emitting private jet aircraft.

Limbaugh and Barone’s comments are extreme, but they do highlight a persisting ideological divide between parties on climate change. According to Gallup, as of March 2013, 85 percent of Democrats think there is strong evidence that global warming exists, but only 48 percent of Republicans and 65 percent of independent voters agree.