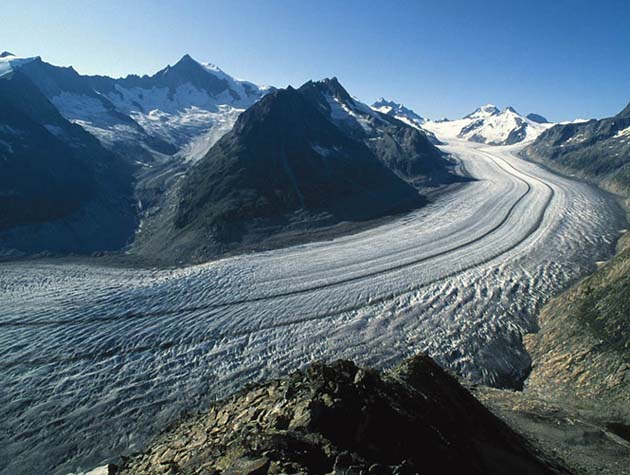 The world’s glaciers are wasting away at a cracking pace—but it’s not just because the climate is warming.

Soot and other black carbon is settling on ice and snow, absorbing the sun’s rays and causing frozen water molecules to melt. It can be hard to tell how much of the melt to attribute to warming and how much to soot.

But researchers have pinpointed a period shortly after the Industrial Revolution when black carbon alone appears to have caused glaciers to melt in the European Alps.

During the middle of the 19th century, the filth from fossil-fuel burning was starting to blanket parts of Europe. “Housewives in Innsbruck refrained from drying laundry outdoors,” said Georg Kaser, a glaciologist at the University of Innsbruck in Austria and coauthor of a paper published Tuesday in the Proceedings of the National Academy of Sciences. But temperatures weren’t yet rising; if anything, it was still getting colder.

Yet in 1865, more than 40 years before temperature records started showing warming in the Alps, the region’s glaciers began a retreat that has continued until this day, marking the end of a 500-year ice age. 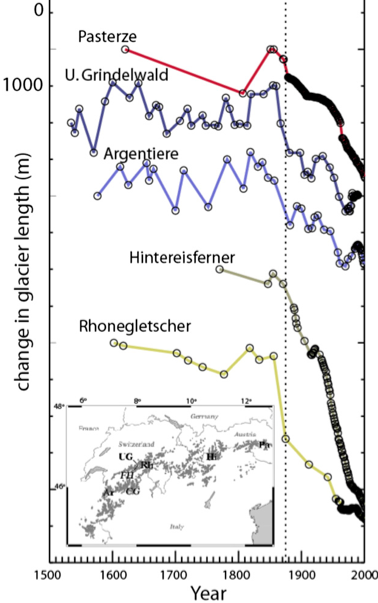 A chart from the PNAS paper tracking the expansion and decline of five glaciers in the Alps since the first measurements. PNAS

Scientists used ice cores and computer simulations to calculate that heat absorbed by polluted snow would have been enough during the second half of the 19th century to melt the snow and expose glaciers to sunlight, kicking off their decline.

“The end of the Little Ice Age in the European Alps has long been a paradox to glaciology and climatology,” wrote Kaser and his coauthors. “Radiative forcing by increasing deposition of industrial black carbon to snow may represent the driver of the abrupt glacier retreats.”

Andreas Vieli, a glaciologist who was not involved with the research, told Nature that the study offers “a very elegant and plausible explanation” for the glacial melt. “It appears that in central Europe soot prematurely stopped the Little Ice Age.”