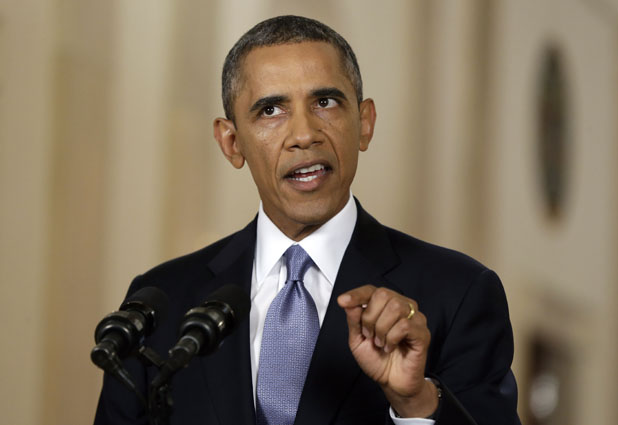 UPDATE: On Friday afternoon, President Barack Obama appeared in the White House press briefing room to announce that he had spoken to Iranian president Hassan Rouhani, to note that Secretary of State John Kerry had made progress in getting a strong UN resolution regarding Syria, and to blast House Republicans for bringing the government to the brink of a shutdown and for threatening to play politics with the debt ceiling. He reiterated his vow not to negotiate over raising the debt ceiling. Extending the government’s borrowing authority so Congress can pay the bills it has already racked up, he said, “is not a concession to me.” He called it “the solemn responsibility” of lawmakers.

With the Washington crisis of the week not yet resolved—whether the US government will shut down on Tuesday because GOPers block legislation funding federal agencies—President Barack Obama, at a rally in Largo, Maryland, promoting Obamacare, looked ahead on Thursday morning to the next showdown and issued a hard-and-fast proclamation: “I won’t negotiate on anything when it comes to the full faith and credit of the United States of America.” Obama was referring to raising the debt ceiling, which will have to be done in the next few weeks (or the US government will default and possibly trigger a financial crisis that could go international). To emphasize that Obama was drop-dead serious about not responding to Republican threats to hold the debt ceiling hostage once again, the White House immediately tweeted out that sentence. The message: This was no off-the-cuff rhetoric.

President Obama: “I won’t negotiate on anything when it comes to the full faith and credit of the United States of America.” #EnoughAlready

Earlier in the day, House Speaker John Boehner (R-Ohio), who’s busy trying to concoct a strategy for the more immediate budget crisis, did respond to Obama’s no-deal position on the debt ceiling: “I am sorry, it just doesn’t work that way.” So though it seems at the moment that a government shutdown might be averted next week—if only by a bill that provides for the temporary and short-term continuation of appropriations for the government—a titanic confrontation is looming over the debt ceiling, with the GOPers angling to prevent an expansion of the government’s borrowing authority unless Obama agrees to accept deeper spending cuts, defund Obamacare, approve the Keystone XL pipeline, or whatever. This is a fight with higher stakes; a global financial crisis would cause more economic chaos than a short government shutdown. And Obama has been planning for this stare-down for two years, saying publicly and privately that he will not blink.

In 2011, when the Republicans first seized the debt ceiling as a political hostage, Obama and his economic team felt compelled to negotiate a settlement, out of fear that a default could be a death blow to the slowly recovering economy. Eventually, they settled on a compromise that included spending cuts that included the now infamous sequestration. But at the time, Obama was more eager to draw a line in the sand than his advisers. And his takeaway from the episode was this: never again. He would not let the opposition party blackmail a president in this fashion.

This conviction was evident last year, when the debt ceiling was part of the so-called fiscal cliff. In December, as that tussle was underway, I wrote about the president’s thinking on this front:

During a Wednesday morning meeting with business leaders, Obama was blunt: “I want to send a very clear message to people here. We are not going to play that game next year. If Congress in any way suggests that they’re going to tie negotiations to debt ceiling votes and take us to the brink of default once again as part of a budget negotiation, which, by the way, we have never done in our history until we did it last year, I will not play that game.”

The public comments from [then-Treasury Secretary Timothy] Geithner, Treasury, and the president do not fully reflect how passionate Obama is on this matter. “He really means it,” a senior administration official insists. And Obama’s top aides have seen him in private display fervor regarding this issue. During a meeting with his senior aides in the middle of the prolonged and heated negotiations in the summer of 2011, Obama let them know that he believed the debt ceiling face-off was in part a fight to save his presidency and those of future chief executives.

At that time, Obama was holding daily bargaining sessions with Republican and Democratic congressional leaders to resolve the debt ceiling crisis and possibly to craft a “grand bargain” budget agreement that would include tax revenue hikes, spending cuts, and reductions in entitlement programs. But with the talks not yielding much progress, Republicans—and some Democrats—were raising the prospect of proceeding with a short-term extension of the debt ceiling. On July 13, 2011, as Obama gathered in the Oval Office with Geithner, then-budget chief Jack Lew, senior economic adviser Gene Sperling, and other aides to prep for the next meeting with the legislators, he drew a line, telling his advisers, “I want to make something clear. I’m not going to accept a short-term extension of the debt.” There was no way, he insisted, he would go through this again in 3, 6, or 12 months—certainly not before the next election.

Obama’s aides empathized with him but explained that the president might have to yield on this to secure a deal that dodged a default. “I’m not doing it again,” Obama said. “This is wrong.”

Obama believed a constitutional principle was at stake: If the Republicans could threaten default to get their way on budget issues, it would distort the separation of powers. This was not what the framers of the Constitution intended, he believed. Moreover, it was embarrassing for the United States. He was determined to prevent this scenario from occurring again.

His aides could see that Obama would not bend. He was willing to go to the brink. Toward the end of that day’s meeting with Hill leaders, when House Majority Leader Eric Cantor raised the idea of a short-term extension, Obama angrily said, “I’m not going to do it. We’re not putting the country through this again. Don’t call my bluff.”

Through the summer 2011 negotiations, Obama stubbornly held to this position—no repeats of this debt ceiling dance—and the final deal avoided a short-term extension of the debt ceiling. During the fiscal-cliff negotiations at the end of 2012, Obama adopted the same stance, but no all-out battle occurred. The White House and Congress, without much fuss, eventually agreed to a temporary suspension of the debt ceiling. But now the reckoning has returned, and GOPers who fear they may have the weaker hand in the government-shutdown clash are pumped up for another debt ceiling throw-down. Not surprisingly, the Rs are enthusiastically citing polls showing that voters don’t support increasing borrowing authority without accompanying spending cuts. But as the 2011 mess demonstrated, Obama was able to shape public opinion by calling out GOP hostage-taking, and at the end of that self-inflicted crisis, which led to the downgrading of the US credit rating, the Republicans fared worse in the polls. No doubt, Obama now thinks he can outmaneuver the Republicans once more. But for Obama this is a rather fundamental fight that he believes must be waged for the benefit of future chief executives and to protect the integrity of the nation’s political system.

So is the final confrontation at hand? Obama has stated clearly he will not negotiate with political extremists who would hold the US government and economy hostage. Boehner, who leads a Republican caucus craving confrontation, has proclaimed he expects the president to deal. Something—or someone—has to give. Or not.