This story first appeared on Gawker.

A bunch of you people on Facebook and Twitter keep sharing a HuffPo stick-figure thing about how Gen Y is unhappy because they’re unrealistic delusional ingrates. 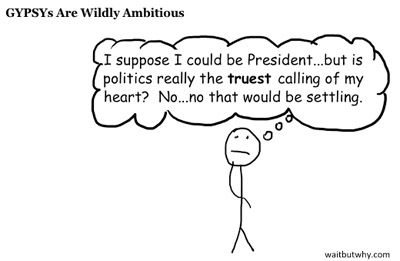 You know, this thing.

If you wrote that, or you liked that, carefully consider these thoughts:

You have no idea about student debt, underemployment, life-long renting. “Stop feeling special” is some shitty advice. I don’t feel special or entitled, just poor. The only thing that makes me special is I have more ballooning debt than you. I’ve tempered the hell out of my expectations of work, and I’ve exceeded those expectations crazily to have one interesting, exciting damned career that’s culminated in some leadership roles for national publications. And I’m still poor and in debt and worked beyond the point where it can be managed with my health and my desire to actually see the son I’m helping to raise.

Younger journos see me as a success story and ask my advice, and I feel like a fraud, because I’m doing what I love, and it makes me completely miserable and exhausts me.

Last weekend my baby had a fever, and we contemplated taking him to the ER, and my first thought was—had to be—”Oh God, that could wipe out our bank account! Maybe he can just ride it out?” Our status in this Big Financial Game had sucked my basic humanity towards my child away for a minute. If I wish for something better, is that me simply being entitled and delusional? 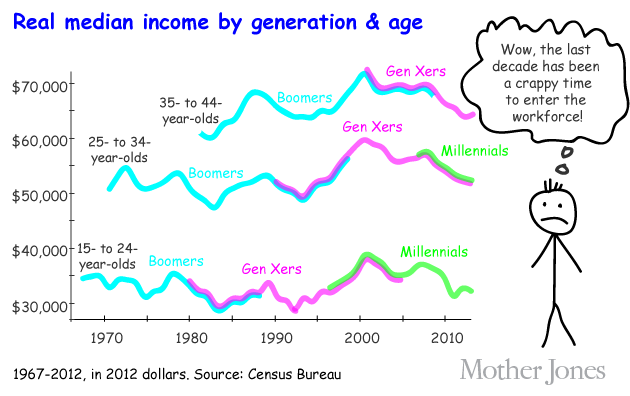 There *are* delusions at play here, but they are not our generation’s. They play out as two contradictory lectures that we are told, simultaneously, by our monied elders:

The latter maxim lurks in the heart of every critique of millennials. It assumes that if we’re worse off than previous generations, the fault is ours, and our complaints are so much white whine. We should shut up and be content, because we do work less than our forebears, and spend more time enraptured by our own navels, trying to divine some life-affirming creative direction in them.

But there’s nothing for us to suck up, really. As a rule, our parents did end up much more dedicated to their careers than we have. But as a rule, they were laid off less. They didn’t intern or work as independent contractors. They got full medical. They were occasionally permitted to adopt magical unicorn-like money-granting creatures called “pensions.” Or, barring that, they accumulated a huger 401(k) to cash out before the Great Recession, because they saved more. And they saved more because the costs of college, of kid care, of health care, of doing business and staying alive and buying groceries and staying connected, were far less than they are today. They could raise a family on one salary if necessary. 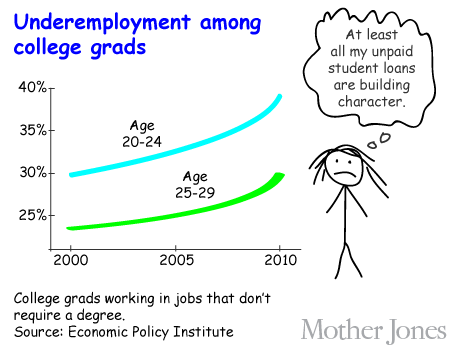 They had room to advance and buy things. Yes, even the creatives. I once listened to a professor, who is in his sixties, read us the first published piece he’d been paid for, in the late 1970s. A thousand words or so. The rate, he says, was something like two bucks a word. That’s four times what the Village Voice pays today, even for an award-winning investigative cover story. It’s geometrically greater than what most writers can earn today writing daily brilliance for nationally renowned publications online. And writing daily brilliance, which many of them do, is hard goddamned work.

If I had a dollar for every older writer or editor who confided to me that “I don’t know how young writers do it today; I certainly couldn’t,” I could buy every property that publishes them.

This state of affairs does not exist because we’re entitled and have simply declined to work as hard as the people that birthed us. American workers have changed from generation to generation: Since 1979, the alleged Dawn of the Millennial, the average US worker has endured as much as a 75 percent increase in productivity…while real wages stayed flat. 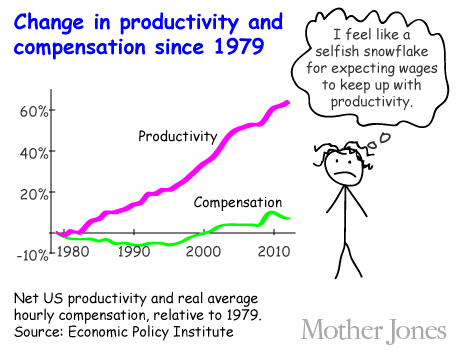 Those changes are blips on a timeline compared to the massive, psyche-altering vicissitudes of American Industry, its self-Taylorization to the point where profit-making and shareholder value have been maximized in ways that Morgans and Carnegies and Vanderbilts couldn’t even have conceived—in ways that have stiffed workers and the families they can no longer afford. Since ’79, the top 1 percent of earners in America has seen their income quadruple.

So take your “revise your expectations! check your ego!” Horatio Alger bullshit, and stuff it. While you’re at it, stuff this economy. Not this GDP, not this unemployment level: this economy, this financial system that establishes complete social and political control over us, that conditions us to believe that we don’t deserve basic shelter and clothing and food and education and existence-sustaining medical care unless we throw our lives into vassalage and hope, pray, that the lords don’t fuck with our retirements or our coverages. (Maybe if we’re extra productive, someday they’ll do a 4o1K match again, like our ancestors used to talk about!)

Take the system that siphons off our capacities for human flourishing in hopes that we get thrown a little coin of the realm in return. Take that system and blow it up, you cowards.