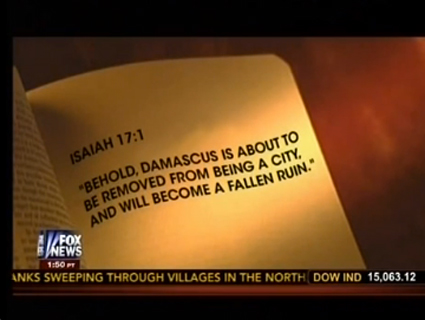 End times buffs have taken a special interest in the possibility of US military strikes in Syria. As I reported last week, popular evangelists and writers like Joel Rosenberg have spent much of the last five years talking up the possibility of a conflict that might fit the one outlined by Isaiah and Jeremiah in the Old Testament, in which Damascus is reduced to rubble. On Saturday, Rosenberg spoke about the Isaiah prophecy in Topeka, Kansas, at the invitation of Republican governor Sam Brownback. On Monday, he appeared on Fox News to elaborate on his views.

Rosenberg wasn’t ready to definitively say that an American war in Syria—which is looking less and less likely by the day—would necessarily match the description of the Old Testament. But it was definitely a possibility. “It’s impossible for us to know that yet, and I think it’s wrong for people who teach Bible prophecy to try to guess, in a sense, to try to say for certain that it’s going to happen now,” he told host Neil Cavuto. “But you have seven million Syrians are already on the run—two million have left the country; five million are internally displaced. The Jeremiah: 49 prophecy says that people will flee, but there’ll still be people in Damascus when the prophecy happens. So the bottom line is we don’t know.”