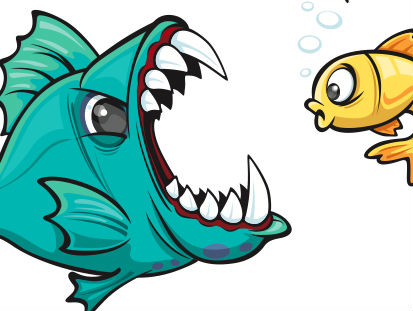 There are hungry piranhas and sharks in the United States Department of Commerce.

And no, that isn’t a metaphor. The nation’s oldest continually operating public aquarium is, in fact, located in the dark basement of the Herbert C. Hoover Building in Washington, DC, just a few blocks from the White House.

The small, 10,000-square-foot National Aquarium has been operating out of the Commerce department’s lower level since the early-1930s. The aquarium, initially established in southwest Cape Cod in 1873 (when Ulysses S. Grant was prez), was handed to the Department of the Interior in the 1940s. Since 2003, it has maintained close working relations with the famous and much larger National Aquarium in Baltimore‘s Inner Harbor.

To give you a frame of reference, the Baltimore aquarium supported 3,300 jobs last year, and had a statewide economic impact of $314 million, whereas the DC facility supported 43 jobs, and had an economic impact barely 3 percent of that. “We’re…small, so we can’t do dolphin shows, but we can focus on national marine sanctuaries,” Bob Ramin, executive director of the mini National Aquarium, told the Washington Post in 2008. But “we have the world’s most adorable baby loggerhead turtle.”

No more. On Monday, the Washington venue will throw in the towel. In May, just five years after the completion of a $2 million-plus, five-year renovation, the board of directors announced that—due to building renovations—the aquarium would close on September 30, and all animals would have to be removed by March 2014. Unless someone steps up with enough money to keep it going, the DC aquarium is headed to Davy Jones’ Locker.

When you step into the aquarium’s ground-floor entryway, you’re met by a couple of guards manning the metal detector and luggage scanner. This corner of Commerce HQ includes a tall gate (reminding visitors not to wander into staff offices), and a pair of fake hammerhead sharks hovering above the metal detector (reminding visitors that there are—for real—sharks here). Beyond the jellyfish tank, the cartoon exhibit designed by cartoonist Jim Toomey (creator of the aquatic-themed strip Sherman’s Lagoon), and a gift shop selling the requisite SpongeBob merch and National Aquarium shot glasses, you’ll find the main collection. In one oval-shaped, compact room, there are roughly 250 species and about 1,500 critters to gawk at.

“Today, we’ll be feeding them a small child from yesterday who was misbehaving.”

On the day I swung by, a huddle of elementary school children were there on a field trip to catch one of the thrice-weekly piranha feedings. The aquarium also highlights feedings of leopard, swell, and horn sharks, and Fridays are reserved for showcasing the appetites of the venue’s small alligators.

The piranha tank is within spitting distance from the alligators (Snappy and Munch Munch), the poison frogs, the electric eel, and the emerald tree boa. After reminding us that no flash photography is permitted, an aquarium employee does his best to frighten and/or entertain the tiny, impressionable children. “Today, we’ll be feeding them a small child from yesterday who was misbehaving,” he jokes to a horseshoe of softly giggling students. He proceeds to clarify that, in lieu of murdering a preschooler, a colleague of his will toss bits of dead shrimp into the tank. “Yum, yum, yum, yumyumyum!” exclaims one child, as the shredding and chomping begins.

Once the facility shuts down, its employees will be tasked with packing up the aquarium’s inhabitants and transporting them safely to their new homes. Many will go directly to the Baltimore facility; staffers will have to blindfold the gators, tape their jaws shut, calm the infamous but small reptiles, and then place them in wooden containers small enough to keep them from thrashing about during the hour-long drive. Sharks will be stored in large plastic containers and tubs and loaded onto a flatbed truck.

The Reagan administration waged a small crusade on the aquarium, deeming it federal waste.

As the aquarium approaches it’s likely demise, it’s worth reflecting on its history of survival. In June 2004, a fire in the Herbert Hoover building disrupted 16 of the venue’s 80 exhibits. In August 2011, a 5.8 magnitude earthquake rocked DC—a few gift shop items were lost; the animals emerged unscathed. But those incidents were nothing compared to the war the aquarium fought against Ronald Reagan in the early 1980s.

Shortly after Reagan took office, his administration embarked on a crusade against what it deemed superfluous federal expenditures. In early 1981, the president proposed $31 billion in spending cuts, including the aquarium’s entire budget for that year—$289,000 it had been guaranteed by the Carter administration. Newspapers reported this as the venue’s death knell, and the aquarium director was heartbroken. “What can I say? I’m not happy,” director Craig Phillips responded. “It’s hard to talk about it without getting emotional.”

Calls to save the aquarium were met by derision from the right-wing commentariat. “There exists in the basement of the Commerce Department building a second-rate, no-account, downtrodden facility known as the National Aquarium,” wrote James Kilpatrick, the pro-segregation columnist and National Review contributor. If “the aquarium syndrome sufficiently infects the body politic, the [fiscal] mess we are in will get worse.”

Roosevelt’s Commerce secretary called for a facility “of such size and architectural excellence that it will be a credit to the nation.”

But the campaign to save the aquarium only grew stronger. A group called Friends of the National Aquarium lobbied Congress aggressively, demanding restoration of the budget. In early 1982, all federal funding was pulled for good, but—after a lot of negotiation—the aquarium was allowed to remain as a private facility, under the sponsorship of a nonprofit society whose board included the wives of Reagan cabinet officials including the secretaries of Commerce, Agriculture, and Transportation. The aquarium has hung on ever since, persisting on a shoestring budget derived from entrance fees and donations. But now its tank has run dry.

Three decades before the aquarium moved into its current home, Theodore Roosevelt’s secretary of commerce and labor had called for the inclusion of a national aquarium in the Department of Commerce building “of such size and architectural excellence that it will be a credit to the nation.” On Monday, the 140-year-old institution’s last day, its visitors probably won’t seize upon the irony of the view they will encounter upon exiting. Situated directly across the street, enjoying the last laugh, will be none other than the Ronald Reagan Building.