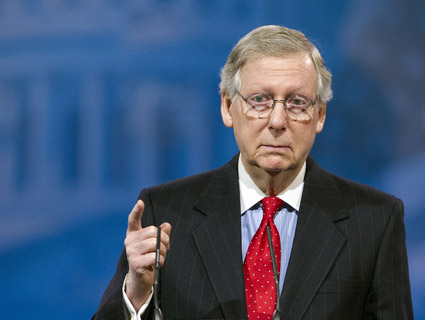 In a sign of just how badly Democrats want to unseat Mitch McConnell, rainmakers from the Obama, Clinton, and Elizabeth Warren camps—political networks that rarely overlap—are uniting behind Kentucky’s Alison Lundergan Grimes.

Grimes needs all the money she can get. McConnell, the Senate minority leader, is a prodigious fundraiser with deep ties to corporate America. He held the first fundraiser of his 2014 campaign the day after the 2012 elections, and subsequent fundraisers have been hosted by the political action committees of Koch Industries, Home Depot, Amgen, and Ford Motor Company. Grimes has privately told Democratic fundraisers that she’ll need a massive war chest of as much as $30 million to effectively compete with McConnell.

Grimes’ campaign is quietly building a fundraising juggernaut to do just that. From Warrenworld, her campaign recently tapped New York fundraiser Michael Pratt for its national finance team, a Grimes aide told Mother Jones. Pratt led the fundraising effort for Warren’s 2012 Senate campaign, in which she raised $42.5 million, the second most of any congressional candidate during that cycle. (The only person who raised more was Connecticut Republican Linda McMahon, a multimillionaire who largely self-funded her losing bid for Senate.)

With Pratt in charge, Warren capitalized on her national following by raising money not just in Massachusetts but across the country—almost $2 million in New York, $1.1 million in Southern California, and just shy of $1 million in the DC area. Hollywood stars Ben Affleck and Matt Damon hosted a fundraiser for her.

Team Grimes also picked up another Warren veteran, Colleen Coffey, the campaign’s in-state fundraising chief who was instrumental in the Massachusetts senator’s small-donor fundraising efforts. Coffey is now reprising that role as the leader of Grimes’ fundraising team. “Michael and Colleen are the best, and I was very lucky to have them leading our fundraising effort during last year’s campaign,” Warren says.

Grimes also has the backing of the Clintons and their powerful political network. As the rumors flew this winter that actress Ashley Judd would challenge McConnell, Bill Clinton was privately urging Grimes to get in the race. The former president reportedly told Grimes that, should she run, the Clintons would rally behind her. Hillary Clinton also consulted with Grimes before she decided to enter the race. Since then, in conversations with Democratic fundraisers and strategists, Grimes has frequently name-dropped the Clintons as she has sought buck-raking recruits for her campaign, according to one Democratic operative.

To raise money in California and other Western states, the Grimes campaign signed up Diane Hamwi, who spearheaded Hillary Clinton’s fundraising effort out West in 2007 and 2008 during her presidential run. The campaign has also enlisted Val Chraca, a prominent Democratic Party fundraiser based in Washington, DC.

One of President Obama’s biggest fundraisers has also gotten behind Grimes. As Politico reported on Tuesday, Jeffrey Katzenberg, the Hollywood mogul and Democratic kingmaker, recently emailed Southern California Democrats inviting them to attend upcoming fundraisers for Grimes on September 25 and 26 in Los Angeles. Katzenberg said he’d already maxed out his contributions to Grimes’ campaign, and he urged his fellow Democratic donors to similarly open their checkbooks for Grimes.

Katzenberg bundled more than $500,000 in campaign donations for Obama in 2012, and he played an instrumental role in launching and funding the pro-Obama super-PAC, Priorities USA Action. All told, Katzenberg marshaled more than $30 million to reelect Obama. “It’s hard to think of any other donor going back to the [1990s] or even further who did what he did,” Bill Allison of the Sunlight Foundation told Mother Jones earlier this year. “He’s like soy sauce in Chinese food: He’s everywhere.”

“There is no more important election being held next year in this country,” Katzenberg said in his fundraising email for Grimes. The movie mogul slammed McConnell as a filibuster-loving obstructionist who has helped turn the US Senate into a dysfunctional mess. “Alison is the antidote to McConnell and all he represents,” Katzenberg wrote. “She can win, and she will win if she gets the support she needs.”

Having assembled top fundraisers from the Obama, Clinton, and Warren teams, Grimes is as well positioned as any Democrat in the country to reap that support.